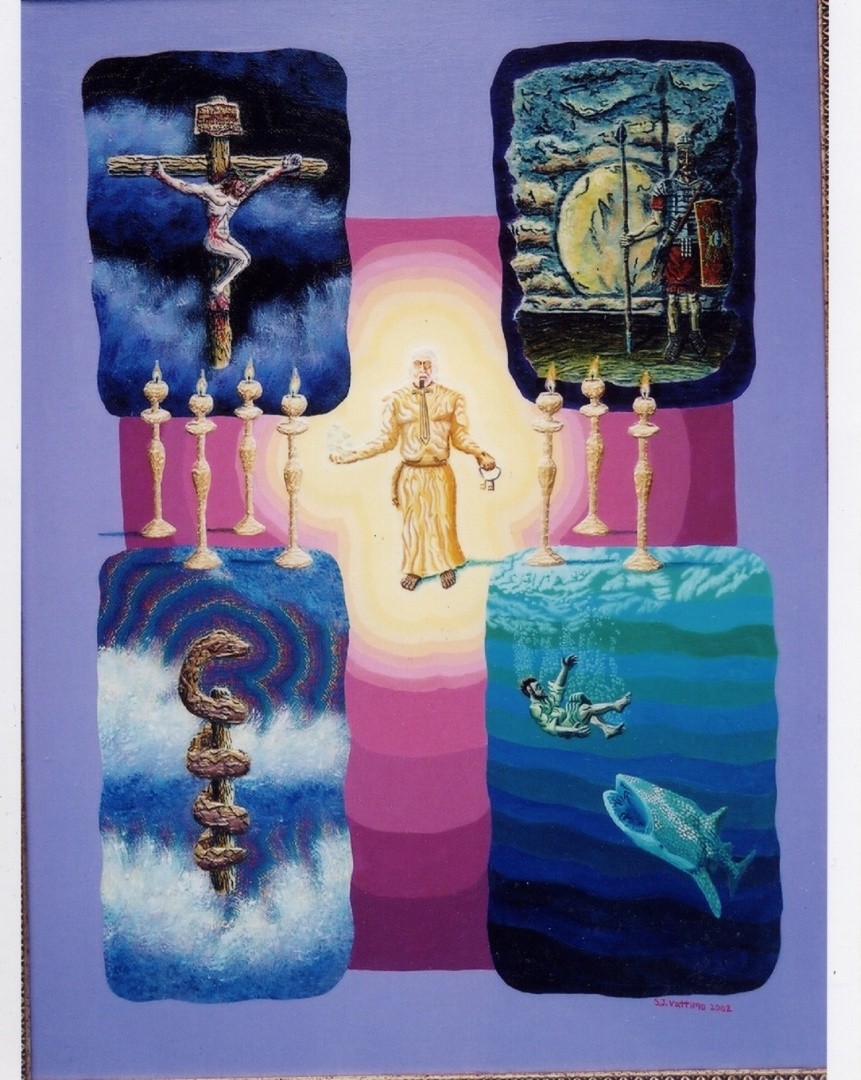 The King Who Conquered Death

Painting size : 4 ft. x 5ft. canvas Medium : Acrylic Year : 2002 This painting illustrates scriptures that show God's plan to remove the power of sin over man and creation, through the death of Jesus the Christ, His only Son, crucified and raised from the dead. the figures on the left illustrate John 3 : 14 - 15, where Jesus tells Nicodemus that , just like the Israelites who were bitten by the serpents, had to look on the bronze serpent with faith, to receive healing from their bites, so must sinners look with faith to Christ's death on the cross, to have the penalty for their sins removed. The figures on the right illustrate Matthew 12: 39 - 40 , Jesus is speaking to the Pharisees and Scribes, who refused to believe He is Messiah. When they asked for a sign, Jesus told them the only sign He would show them was the sign of the prophet, Jonah. Just as Jonah was in the belly of the great fish for three days and three nights, and then was spit up on the shore, so would Jesus be in the heart of the earth for three days, and three nights, then God will raise Him from the dead. The figures in the center of the painting illustrate Revelation 1 : 12 - 20, The apostle John describes the appearance of The Glorified Christ , Who is speaking to him in a vision. He describes Jesus' appearance as being bright as the sun. God has put all authority and power over the earth and The Heavenly Kingdom in Jesus' Hands. Christ will reward the faithful servants of God and He will cast the unbelieving , Satan, fallen angels into The Lake Of Fire. Jesus has been given the keys to Death and Hades, and He will destroy both. In His new kingdom, there will be no place found for them, for sin will not exist. Jesus the Christ is the church's High Priest and He will offer up the prayers and praises to God on our behalf. He empowers the church to do the work of God in a fallen world. Written by Stephen J. Vattimo May 22 , 08