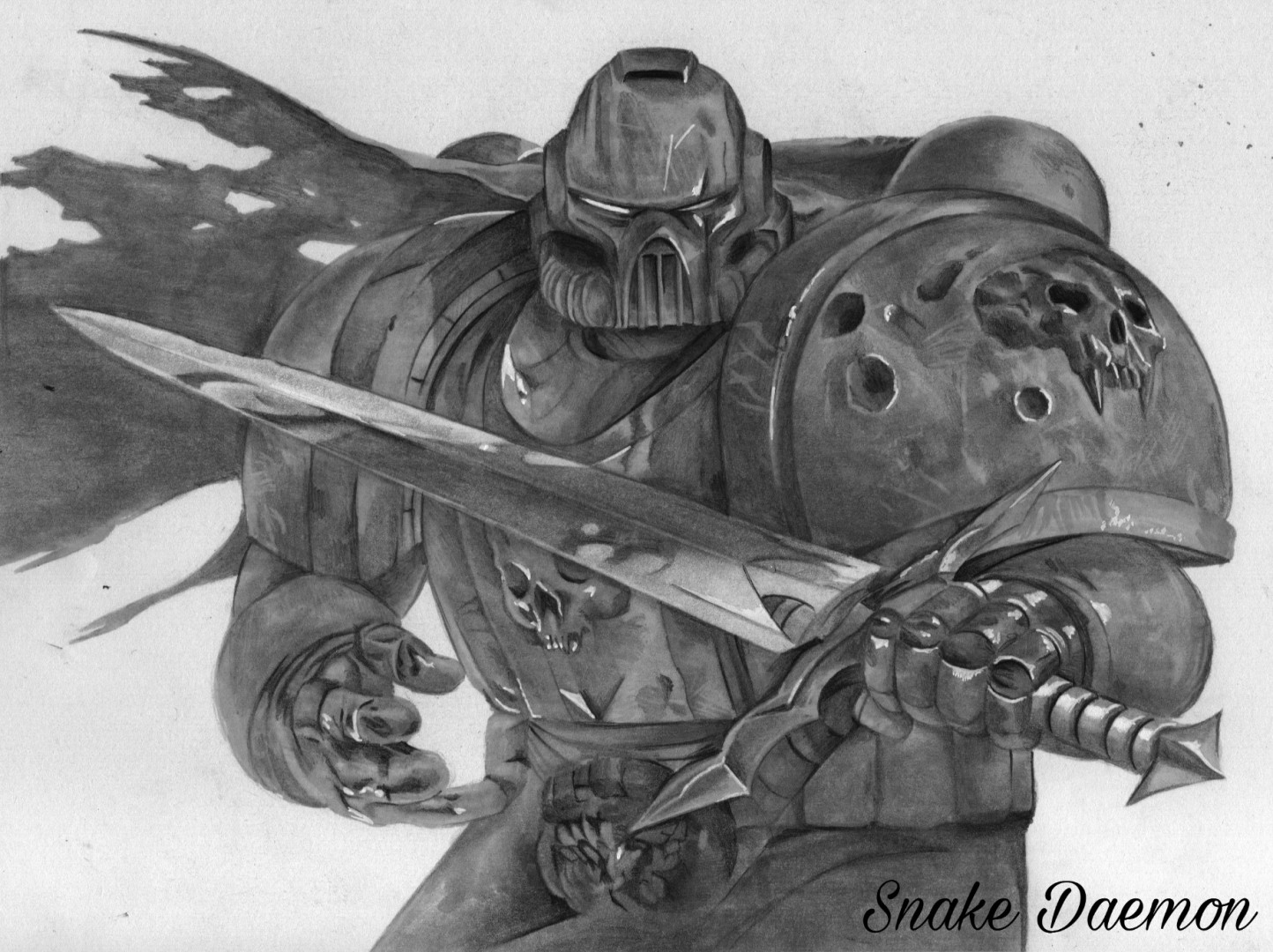 The Space Marines or Adeptus Astartes are foremost amongst the defenders of Humanity, the greatest of the Emperor of Mankind's warriors. They are barely Human at all, but superhuman; having been made superior in all respects to a normal man by a harsh regime of genetic modification, psycho-conditioning and rigorous training. Space Marines are untouched by plague or any natural disease and can suffer wounds that would kill a lesser being several times over, and live to fight again. Clad in ancient power armour and wielding the most potent weapons known to man, the Space Marines are terrifying foes and their devotion to the Emperor and the Imperium of Man is unyielding. They are the God-Emperor's Angels of Death, and they know no fear. The Astartes are physically stronger, far more resilient and often mentally far removed from the lot of most normal Human beings. In the presence of the Astartes, most people feel a combination of awe and fear, and many cultures on the more primitive worlds simply worship them outright as demigods or angels of the God-Emperor made flesh. They should feel so, for many Space Marines feel little compassion for those they have sometimes termed "mortals" in comparison to themselves, seeing the very people they were created to protect as little more than obstacles to a more efficient eradication of the Imperium's enemies. This is an attitude sometimes taken by whole Chapters. They see normal Humans as frail, weak creatures given to the follies of temptation, avarice, greed, lust and cowardice -- all emotions they rarely feel, if ever. Yet there are some Astartes who remember why they were created by the Emperor, who avoid the trap of hubris which the Space Marines are so prone to and which has seduced so many of their number to serve the Ruinous Powers of Chaos. They are the final guardians of Mankind, the saviours of last resort. A Firstborn Space Marine of the Ultramarines Chapter. They were intended not to lead Humanity, but to defend it, sometimes even from itself. At the heart of that mission lies the limitless compassion the Emperor extended to every man and woman in the galaxy when He willingly chose to condemn Himself to more than 10,000 years of imprisonment within a dying prison of flesh for their sake. Some Astartes sneer at compassion, seeing it as one more Human weakness that has been purged from their superior transhuman bodies and minds. But the wisest of the Space Marines know that in the end, compassion is their only salvation. Potential Space Marines are usually, but not always, recruited from the worlds where a Chapter has established its fortress-monastery, although some Chapters are known to recruit from a collection of different worlds in an area of space that they protect or frequent. Recruiting methods vary from Chapter to Chapter. Some select their neophytes from feral tribes roaming the surface of inhospitable worlds, while others draw upon eager volunteers who have been groomed from birth to become an Astartes. Still others watch and kidnap potential warriors, turning them into Astartes whether they will it or not. Whatever the method, all Space Marine Chapters will only accept those who successfully pass the grueling initiation trials and prove themselves worthy of becoming a Space Marine. A Primaris Space Marine Intercessor of the Ultramarines Chapter in Mark X Tacticus Pattern Power Armour wielding a Mark II Cawl Pattern Bolt Rifle. However a man becomes a Space Marine does not matter: once his body has been forged into that of a transhuman Astartes, he must forever stand apart from the people to whom he was once kin and who he is now sworn to protect. Once a man becomes a Space Marine, he is no longer mortal; his genetic heritage is now that of the Emperor Himself, and a spark of the same divine majesty flows in his veins. There are approximately 1,000 Space Marine Chapters active in the Imperium of Man at any one time. Since the opening of the Great Rift, these Chapters have been comprised of a mixture of traditional Firstborn Space Marines and the even more enhanced Primaris Space Marines, or may contain only Primaris Marines. A list of the most notable and well-known Chapters in the Imperium can be found here. This number has stayed relatively constant since the Second Founding in the 31st Millennium following the Horus Heresy when the First Founding Space Marine Legions were broken up. However, the exact population of Astartes in the galaxy remains far from exact and may fluctuate widely depending on the time period and the circumstances confronting the Imperium.