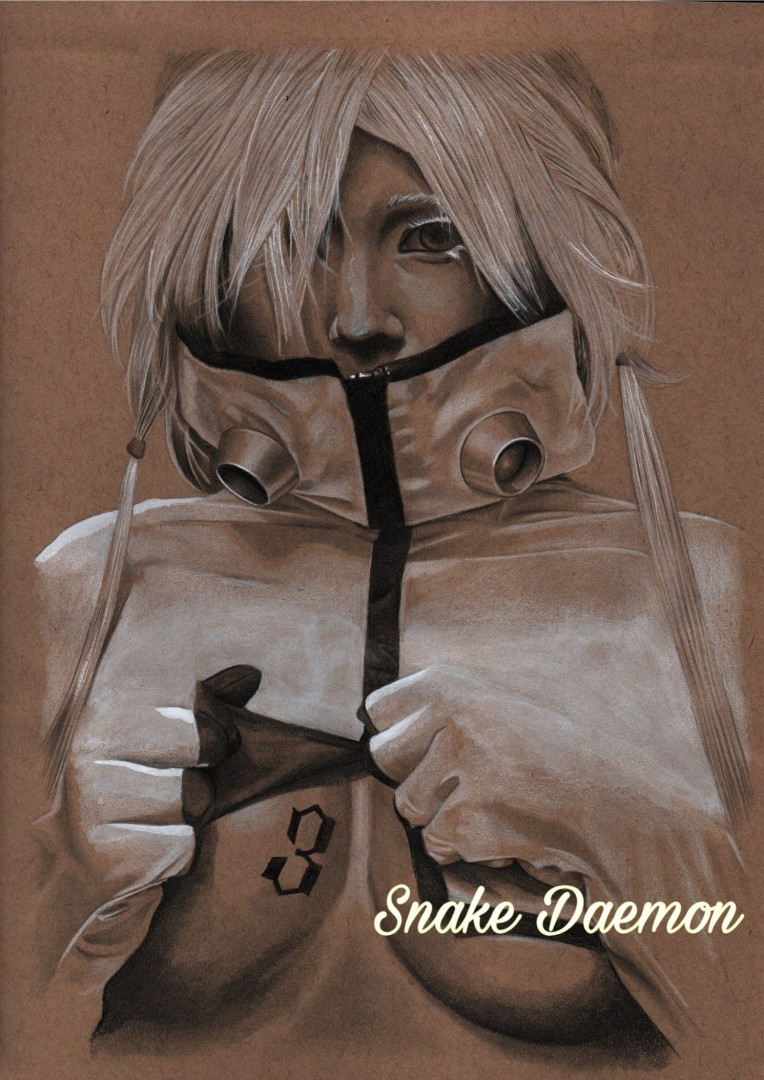 Tier Halibel (ティア・ハリベル, Tia Hariberu, romanized as Tier Harribel in the Japanese media) is the Tercera Espada, signified by the "3" tattooed on the left side of her right breast. She is also the only female Espada. The aspect of death she represents is sacrifice. She appears calm and rarely speaks; when she does, it is fairly serious. In contrast to the majority of her fellow Espada, Halibel prefers not to engage in combat, much less commit acts of unnecessary slaughter; she is content with silently observing the battle between Soul Reapers and Arrancars until it reaches its conclusion and refuses to fight unless she or her Fracciones are challenged or ordered by her superiors. The only reason she wants power is to protect those who she cares about such as her Fracciones. In the anime, Halibel's backstory as a shark-like Vasto Lorde, in which she gathers female Menos to work together against more aggressive male Menos that consider them easy prey, is revealed. After saving the three Adjuchas named Emilou Apacci, Franceska Mila Rose, and Cyan Sung-Sun, who joined her campaign, Halibel becomes at odds with Baraggan for defying him and made an enemy out of a Hammerhead hollow who attacked her group once becoming an arrancar. Only able to survive because of Aizen's intervention, touched by his speech of not wanting needless sacrifice, Halibel joins his group with her three comrades becoming her Fracciónes: the Tres Bestias. Her Zanpakutō is named Tiburón (皇鮫后(ティブロン), Tiburon, Spanish for "Shark", kanji translates as "Imperial Shark Empress"). She carries it horizontally behind her shoulders; the sword itself is notably broad and short compared to those of other Espada, and the inner portion is hollow, with only the "outline" of the sword. The sword can create 'ribbons' of energy from the empty inner portion named Ola Azul (波蒼砲(オーラ・アズール), Ōra Azūru, Spanish for "Blue Wave", kanji translate as "Blue Wave Gun") to be used in combat. When released, she loses the portion of the hollow mask that covers her face and gains markings on each side of her face, as well as two wing-like protrusions on her back, an armored skirt, and armor that covers her arms, shoulders and legs. She also carries a massive pata, which resembles an elongated shark tooth. Her strength and speed are increased in this state, evident by the charge and blow she delivers to Tōshirō Hitsugaya, severing a large portion of his upper-body before he could even react (though this was later revealed to be a clone of Hitsugaya made of ice). She is able to conjure and control large amounts of water to perform attacks in this form. Her battle with Tōshirō starts off in her favor, but soon levels to a draw as their powers are opposites. However, as she attempts to avenge her Fracciónes' apparent deaths by Yamamoto, Tōshirō reveals that his Zanpakutō Hyōrinmaru can control the weather. He then proceeds to trap her in an ice prison with his newly learned Hyōten Hyakkasō technique, leaving her to die. However, Wonderweiss arrives and frees her by just yelling. Halibel then engages Tōshirō and the Visards Hiyori and Lisa, maintaining her ground despite being outnumbered. After witnessing the deaths of Stark and Barragan, Aizen interrupts Halibel's battle and slashes her with his sword, stating that she "is not strong enough to fight for him anymore." Halibel recalls her past and, after an unsuccessful attempt to kill him, Aizen cuts Halibel down as she is disillusioned that their ideals on sacrifice are vastly different. Though her injury was fatal, Orihime heals Halibel's wounds at the battle's conclusion, allowing her and the Tres Bestias to return to Hueco Mundo, where Halibel reluctantly became the land's ruler by default. Seventeen months later, Halibel is defeated by the Wandenreich leader, Yhwach, and is imprisoned while her captors take over Hueco Mundo. Her fate following the defeat of the Wandereich at the end of the series remains unknown. She is voiced by Megumi Ogata in the Japanese version and by Laura Bailey in the English dub.