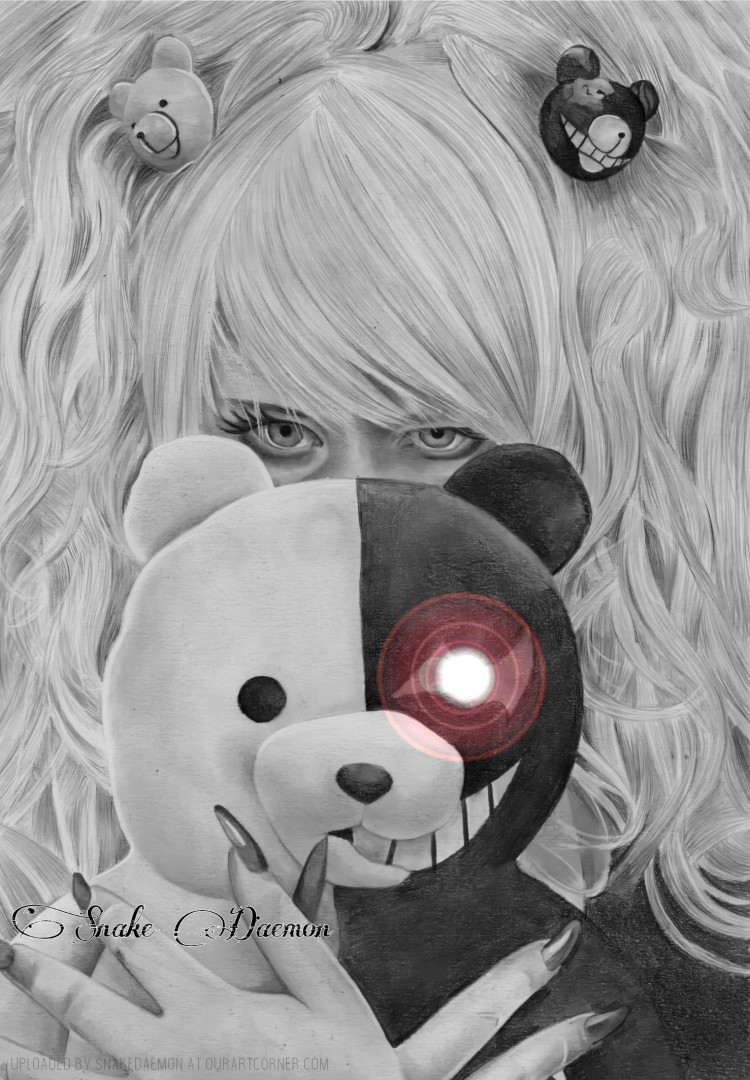 Voiced by (English): Amanda Celine Miller/Erin Fitzgerald (game); Jamie Marchi (anime) Voiced by (Japanese): Megumi Toyoguchi The main antagonist of the first game. A charismatic gyaru fashion model who has modeled for many popular magazines. She is thought to have been killed by Monokuma near the start of the game, having been impaled by several spears after assaulting Monokuma as punishment for breaking the school rules. It is soon revealed that she is actually the true mastermind behind the events of the game, who had erased the memories of all the students and put them in this death game. The one who was really killed was her twin sister, Mukuro Ikusaba. Her true personality is one that is constantly changing as she gets bored easily and thrives to drive people to despair. The strangeness of her true persona is also compounded by her having to play the role of Monokuma, who has a drastically different personality from her own, as well as the stress of running the Mutual Killing Game by herself without any kind of support. By the time the survivors confront her, it is said that Junko has gone completely insane, her original personality long since lost in her psychosis. She is also the cause of the current state of the school and the world, having manipulated and brainwashed the school's disgruntled reserve course students into rioting over their unfair treatment, which the school desperately tried to cover up until it spilled out into the outside world and caused a worldwide uprising against those perceived as special or privileged. When her plans are foiled by Makoto's dedication to never give up hope, she begins to revel in the ultimate form of despair and commits suicide by subjecting herself to a combination of the executions she inflicted on the other students. At the last second before her death, she becomes bored with despair and dies without knowing the despair of death she was so excited about mere seconds ago. Her body is then dismembered by several members of Ultimate Despair and the parts grafted onto their bodies. Her title is Ultimate Fashionista (超高校級の「ギャル」, Chō-kōkō-kyū no "Gyaru", Super High School Level Gal), but her true titles are Ultimate Analyst (超高校級の「分析力」Chō kōkō kyū no Bunsekiryoku, Super High School Level Analytical Prowess) and Ultimate Despair (超高校級の「絶望」, Chō-kōkō-kyū no Zetsubō, Super High School Level Despair). In Danganronpa 2, an Alter Ego version of Junko infiltrates the virtual world as a virus, turning what should have been a rehabilitation program into another killing game intended to both provide a physical host for her consciousness and to jog the memories and personalities of the students she was able to manipulate into her nihilistic philosophy. She attempts to get the remaining students to graduate so that her personality can take over the real world bodies of those that died within the virtual world, but she is ultimately thwarted by Hajime Hinata and the other students, being destroyed when the virtual world is shut down. Her avatar appears as a fully three-dimensional giant version possessing a video cell phone that she uses to communicate with the students in the virtual world. She reveals that, after having failed twice, she doesn't feel despair at her defeat, just disappointment, which she had earlier claimed to be the one emotion that she hates above all else since it can't be used constructively in any way.