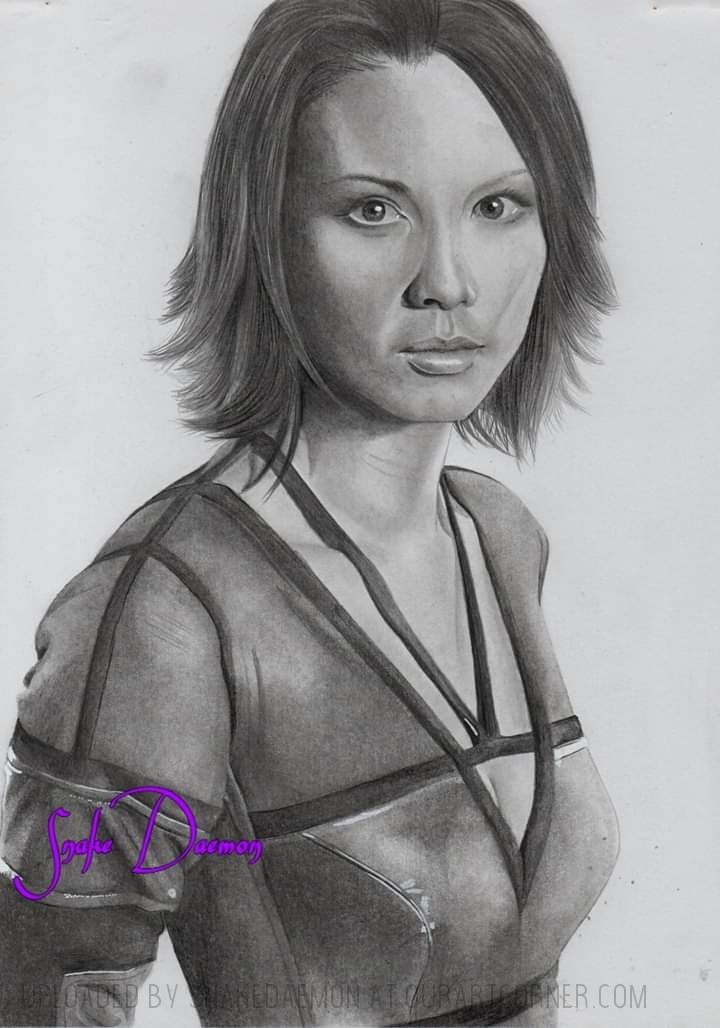 Rommie was played by Canadian actress Lexa Doig. In the show Rommie (short for Andromeda) is the humanoid avatar of the Andromeda Ascendant, a starship in the TV series. She was built and given material form as an android by the engineer Seamus Harper, who also seems to be infatuated with his work. As a ship's avatar, Rommie is a unique aspect of the Andromeda's AI, which also manifests itself as a hologram and an on-screen image. Early on in the series, it is stated that avatars were created to allow the crew to relate to their ship on a more human level, and vice versa. Her personality, though, is largely defined by her function: "I am a warship, and I don't like walking away from a fight," is one of her recurring lines. She is very loyal to her crew, especially to her captain Dylan Hunt, and incredibly protective of those in her charge. She is confident, direct, and often displays a sense of pride in her status as a warship capable of destroying entire populations. Since her creation, Rommie is shown to have evolved differently from the ship's AI. Rommie maintains a certain amount of individuality and is distinct from the core AI to a larger, yet unspecified degree; they are often seen chatting, disagreeing and even arguing. These disagreements often occur because Rommie exhibits human emotions more deeply and far stronger than the logic-oriented core AI. This can be seen to great effect in the Season One episode "Star Crossed," in which Rommie falls in love with another ship avatar, Gabriel. Rommie's individuality also protects her from some of the ailments that afflict Andromeda's AI, such as the reprogramming accidentally triggered by Harper during the episode "...Its Hour Come 'Round at Last." Harper accidentally activates a version of the ship AI that had been deleted (apparently) after a failed mission; the ship's AI is reprogrammed, whereas the android is unaffected. At other times, however, if the ship itself is damaged or infected, Rommie is also shut down. Rommie's nature as an artificial construct provides her abilities that would be considered superpowers by humans, such as super strength and speed, resistance to injury and heightened senses. Using the sensors in her hands and eyes, she can detect the physiological signs associated with lying and diagnose internal injuries. Rommie also exhibits near complete awareness of and control over the workings of the ship itself. For example, she is able to change the level of artificial gravity in a given location or turn lights on or off merely by thinking the commands. She is also capable of instantaneously changing parts of her appearance, most notably the length, cut and colour of her hair. In the Season Four finale, Rommie's body is destroyed while protecting Harper from Magog in a scene that loosely mirrors a scene from the Season One finale. All that is left is her partially damaged head and her core AI. Harper was unable to rebuild her due to the lack of sophisticated technology in the Seefra system. His attempts to virtually connect with her AI failed, as she became hostile. Dylan was later able to convince her to shut herself down. Rommie was eventually put into a new gynoid body built by Doyle. At first she almost killed the entire crew, due in part to the use of Vedran technology in building her new body; however, she was able to be repaired and, after working out some competitive issues between her original AI and Doyle, returned to her usual place in the crew. Due to Lexa Doig's pregnancy during the filming of the fifth season of Andromeda, writers re-wrote part of the season finale so her character could be excluded from the first two thirds of Season 5. The character Doyle was written to replace her during this time. Rommie's 'new' body is thicker and bustier than her old body, due to the physiological changes that occur in a woman during pregnancy and child birth, and upon being asked by Dylan how she felt, Rommie answered "Sturdy." Before coming to Andromeda, Lexa Doig starred in the science-fiction horror film Jason X with Andromeda co-star Lisa Ryder; however, in Jason X Lexa played a human and Lisa, who plays a human character in Andromeda, played an android. Vincent Terrace describes the character as "very sexy and very beautiful". Dominique Mainon and James Ursini refer to the character as "the most unique" woman warrior in a "series based on Roddenberry models." Sherry Ginn discusses the character further in Our Space, Our Place: Women in the Worlds of Science Fiction Television