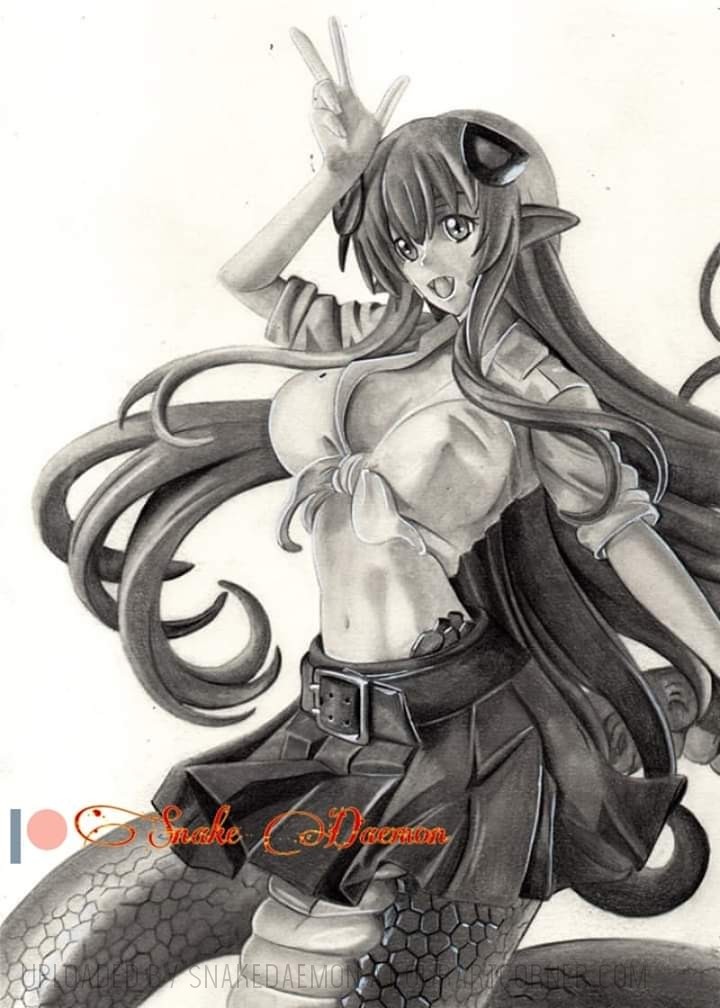 Voiced by: Sora Amamiya (Japanese); Allison Sumrall (English) Miia (ミーア, Mīa) is a lamia (part woman, part snake),[ch. 1] the first liminal to live with Kimihito. She is about 8 meters (26 ft) long, but always moves with her front upright, so she appears to have normal human height. She has red hair, golden eyes with vertical slit pupils and pale human skin, and her snake part has copper scales with a pinkish-cream underbelly (the tip of her tail is particularly sensitive). Her standard accessory is a pair of D-shaped hair clips, which are a standard fashion statement among her people. Unlike snakes that have no visual outer ear, Miia has rather large triangular, scaly ears. She is a poikilotherm, which makes her drowsy in mornings or cold weather and can be considerably dangerous for her if she enters cold water. She has a pleasant personality and harbors a very strong crush (both figuratively and literally, considering that her species is a constrictor) on Kimihito — actually on the brink of the obsessive: all lamia are female — they need a human male for procreation and are very passionate about their partners. In Chapter 27, it is revealed that Miia's original reason for studying abroad was to find a "tribal husband" for her home village: the lamia custom was that a human male would be "coerced" (taken against his will) and brought back to be shared among all the lamias, but when the Interspecies Exchange Accord was enacted and laws were passed protecting humans from liminals, that method had to be abandoned. However, after getting to know Kimihito, Miia fell madly in love with him.[ch. 27] It's also revealed (by Miia's mother) that at some point Miia's father escaped from the lamia tribe.[vol. 7: "Meeting of the Mothers"] As she sees herself as the primary marriage candidate for Kimihito, she is often in conflict with the other girls. She is not a good housekeeper and an abysmal cook; on several occasions, she accidentally gives the other household members food poisoning, due to her sense of taste being far weaker than a human's and her frequent use of "alternative" (but inappropriate) ingredients. In Chapter 43, thanks to a recommendation from the priest for whom Ils Nineta (see below) works, she gets a part-time job as a shrine maiden at a shrine near Kimihito's home, where (thanks to snakes being considered extremely lucky in Japan) she is an instant success. She refers to Kimihito as Darling (だぁりん, Dārin).