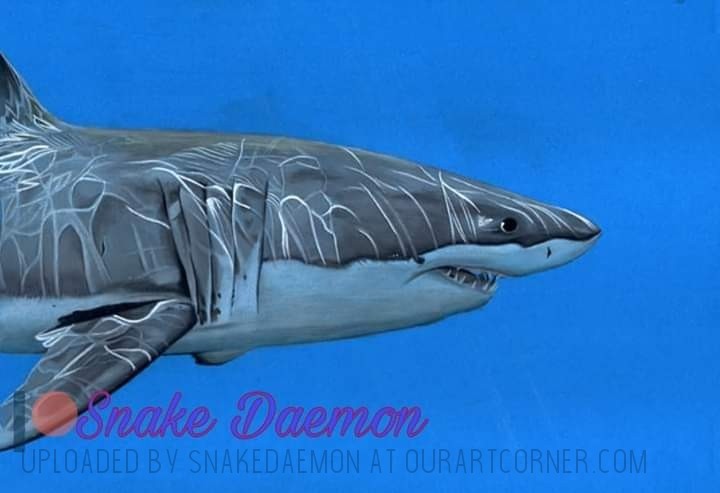 The great white shark (Carcharodon carcharias), also known as the great white, white shark or "white pointer", is a species of large mackerel shark which can be found in the coastal surface waters of all the major oceans. It is notable for its size, with larger female individuals growing to 6.1 m (20 ft) in length and 1,905–2,268 kg (4,200–5,000 lb) in weight at maturity. However, most are smaller; males measure 3.4 to 4.0 m (11 to 13 ft), and females measure 4.6 to 4.9 m (15 to 16 ft) on average. According to a 2014 study, the lifespan of great white sharks is estimated to be as long as 70 years or more, well above previous estimates, making it one of the longest lived cartilaginous fish currently known. According to the same study, male great white sharks take 26 years to reach sexual maturity, while the females take 33 years to be ready to produce offspring. Great white sharks can swim at speeds of over 56 km/h (35 mph) and can swim to depths of 1,200 m (3,900 ft). The great white shark has no known natural predators other than, on very rare occasions, the killer whale. It is arguably the world's largest-known extant macropredatory fish, and is one of the primary predators of marine mammals, up to the size of large baleen whales. This shark is also known to prey upon a variety of other marine animals, including fish, and seabirds. It is the only known surviving species of its genus Carcharodon, and is responsible for more recorded human bite incidents than any other shark The species faces numerous ecological challenges which has resulted in international protection. The IUCN lists the great white shark as a vulnerable species and it is included in Appendix II of CITES. It is also protected by several national governments such as Australia (as of 2018). The novel Jaws by Peter Benchley and its subsequent film adaptation by Steven Spielberg depicted the great white shark as a "ferocious man-eater". Humans are not the preferred prey of the great white shark, but the great white is nevertheless responsible for the largest number of reported and identified fatal unprovoked shark attacks on humans. Due to their very large natural range, it is not logistically feasible to keep great white sharks in captivity. No aquarium in the world is currently believed to own one.