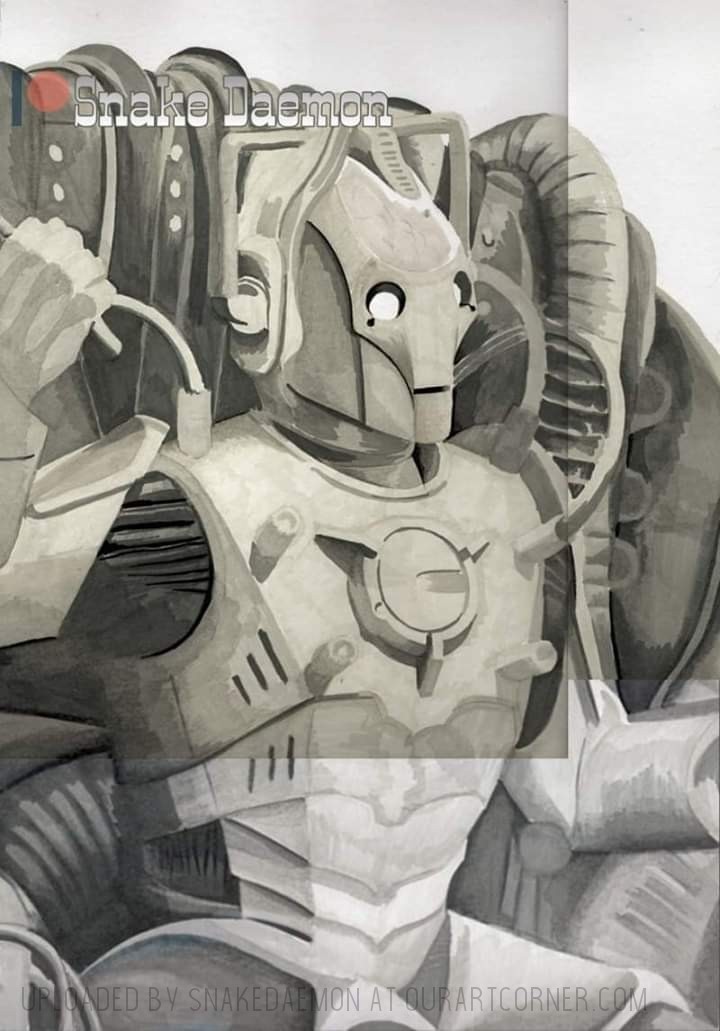 Cyber-Controller - half way, pen only

The Cybermen are a fictional race of cyborgs who are among the most persistent enemies of The Doctor in the British science fiction television programme Doctor Who. Within the context of the series, the Cybermen are a species of emotionless space-faring cyborgs who convert human beings (or other similar species) to join and populate their ranks. First appearing in 1966, the Cybermen were created by Dr. Kit Pedler (the unofficial scientific advisor to the show) and story editor Gerry Davis. The Cybermen have seen many redesigns and costume changes over Doctor Who's long run, as well as a number of varying origin stories. In their first appearance, The Tenth Planet (1966), they are humans from Earth's nearly identical "twin planet" of Mondas who upgraded themselves into cyborgs in a bid for self-preservation. Forty years later, the two-part story, "Rise of the Cybermen" and "The Age of Steel" (2006), depicted the Cybermen as a business corporation's invention on a parallel universe version of Earth. Doctor Who audio dramas, novels, and comic books have also elaborated on existing origin stories or presented alternatives. The 2017 episode, "The Doctor Falls", explains the different origins as parallel evolution, due to the inevitability of humans and human-like species attempting to upgrade themselves through technology; this perspective resolves continuity differences in the Cybermen's history. A mainstay of Doctor Who since the 1960s, the Cybermen have also appeared in related programs and spin-off media, including novels, audiobooks, comic books, and video games. Cybermen stories were produced in officially licensed Doctor Who products between 1989 and 2005, when the TV show was off the air, with writers either filling historical gaps or depicting new encounters between them and the Doctor. The species also appeared in the Doctor Who TV spin-off Torchwood, appearing in the fourth episode, "Cyberwoman" (2006).