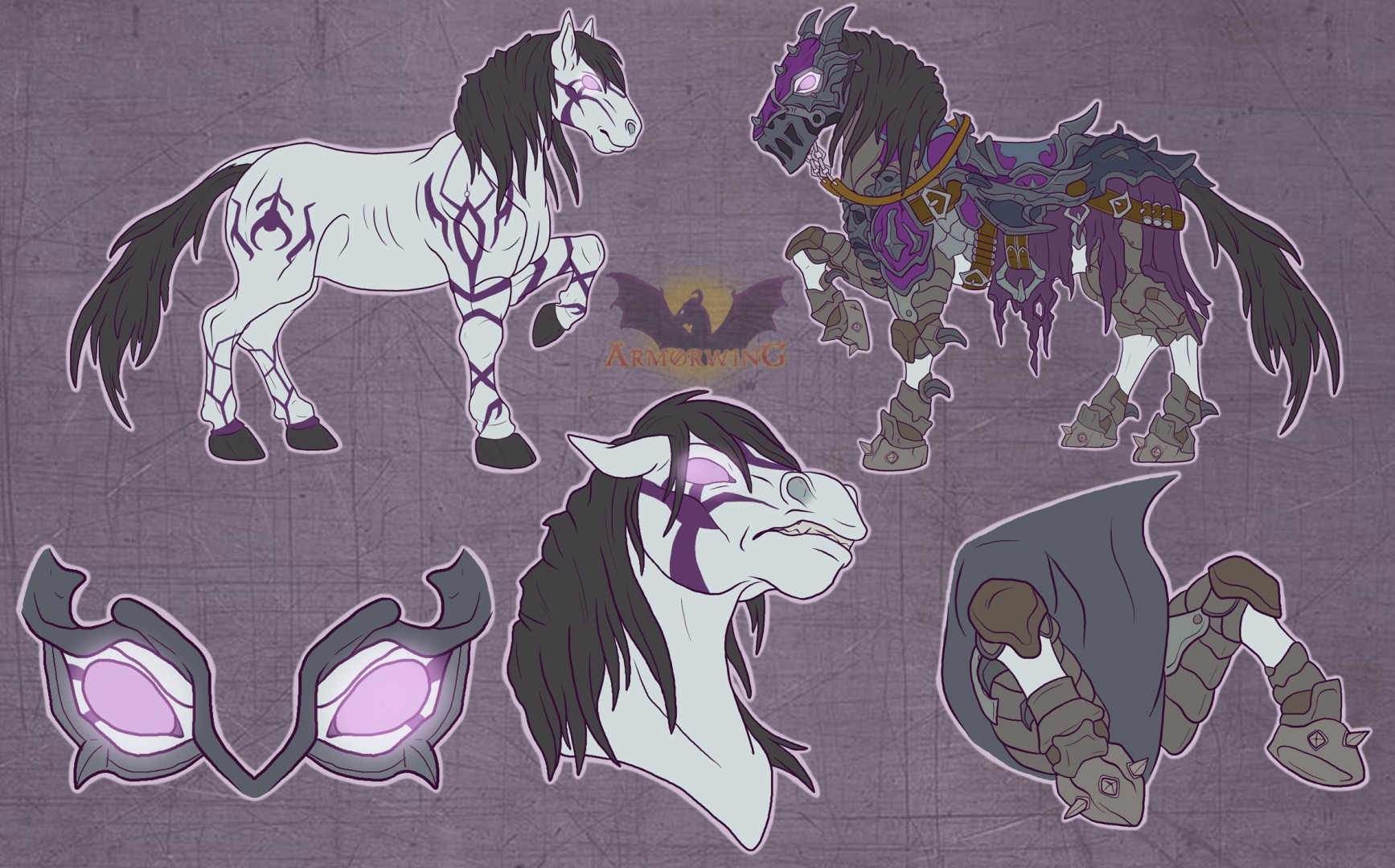 We've come to the last horse in my Darksiders Headcanon series! It's been surprisingly fun drawing all these horses, but I'm excited to get to my original ideas for the series. So let's wrap it up with Strife's horse Mayhem! Physical Description Mayhem is the only mare of the Phantom horse group. She's of average build but considerably tall. Her coat is pure white, with violet markings around the face, legs, shoulders and flanks. These markings are very geometric in shape, minus the symbols on the shoulders and flanks. The mane and tail are made of long black hair, both cut in a jagged and uneven way. The hooves are well-kept and dark grey. Her lilac eyes constantly shine ghostly purple light. Her ears are long and thin. Saddle Description (This includes the extensive armor covering most of her body) Mayhem is heavily inspired by the destriers of medieval times. The armor covers all of the body minus the lower joints and belly. A helmet encompasses the entire head, leaving only eye holes and slits around the mouth for ventilation. Hornlike extensions cover the ears. The rest of the armor is composed of overlapping plate armor and sculpted metalwork. Two belly straps and a highly decorative breast collar hold the saddle in place. Two folded wings and eyes adorn the sides of the saddle. A pained face framed by two eagle heads sits on the breast collar. A ragged purple caparison sits under the saddle and armor. The hooves are covered in metal boots with 3 spikes surrounding the shoe. Larger spikes stick out the side of the joints. The neck is encased in plated armor with room for the mane to flow out. The reins are the only reins made of simple leather. The straps around the shoulders and flanks are fixed to carry extra ammunition for Strife. Personality Mayhem is surprisingly the most calm and cool of the horses, besides Despair. This doesn't mean she doesn't cause trouble, just that she's the most discreet about it. While Strife can be outright defiant and obnoxious to others, Mayhem prefers to sow disorder quietly. She possess the ability to stir up aggression and anxiety in other creatures within a certain distance of her. This use to be more effective against the other horses, but they eventually learned to resist most of her influence (usually whenever she's bored). She's also very clever, capable of outsmarting lower to mid-level intelligent enemies. It allows her to figuratively and literally run circles around most other creatures. Outwardly, one would think that nothing could bother her as she always has a reaction that seems planned. But like Rampage, Mayhem is just less comfortable revealing her true self: one who can be hurt like everything else. She has a even amount of respect among the other horses, though Despair is more wary of her tricky nature. She gets along best with Rampage, partially because she most understands him, but also because she loves to push his buttons at times. Skills and Fighting Abilities Mayhem is most gifted in agility. She excels at dodging enemies and weapons while giving her rider the best angle to fire at. Despite the excessive armor, it hardly affects her performance. She's not the most proactive in combat, usually letting her influence cloud the enemies judgement and concentration. This can result in a long enough pause or miscalculation that presents an easy target for takedown. But when she does fight, she uses her armored hooves to bash in enemies or her head as a battering ram (cleaning the armor after battles is not an easy task). The intricate armor can protect against most sharp weaponry or absorb semi-heavy blows. That's the end of the Darksiders steeds! Next, I'll create animal companions for the other riders like Death's crow Dust. But I might take a short break to work on other stuff to prevent burnout. Stay tuned for more!