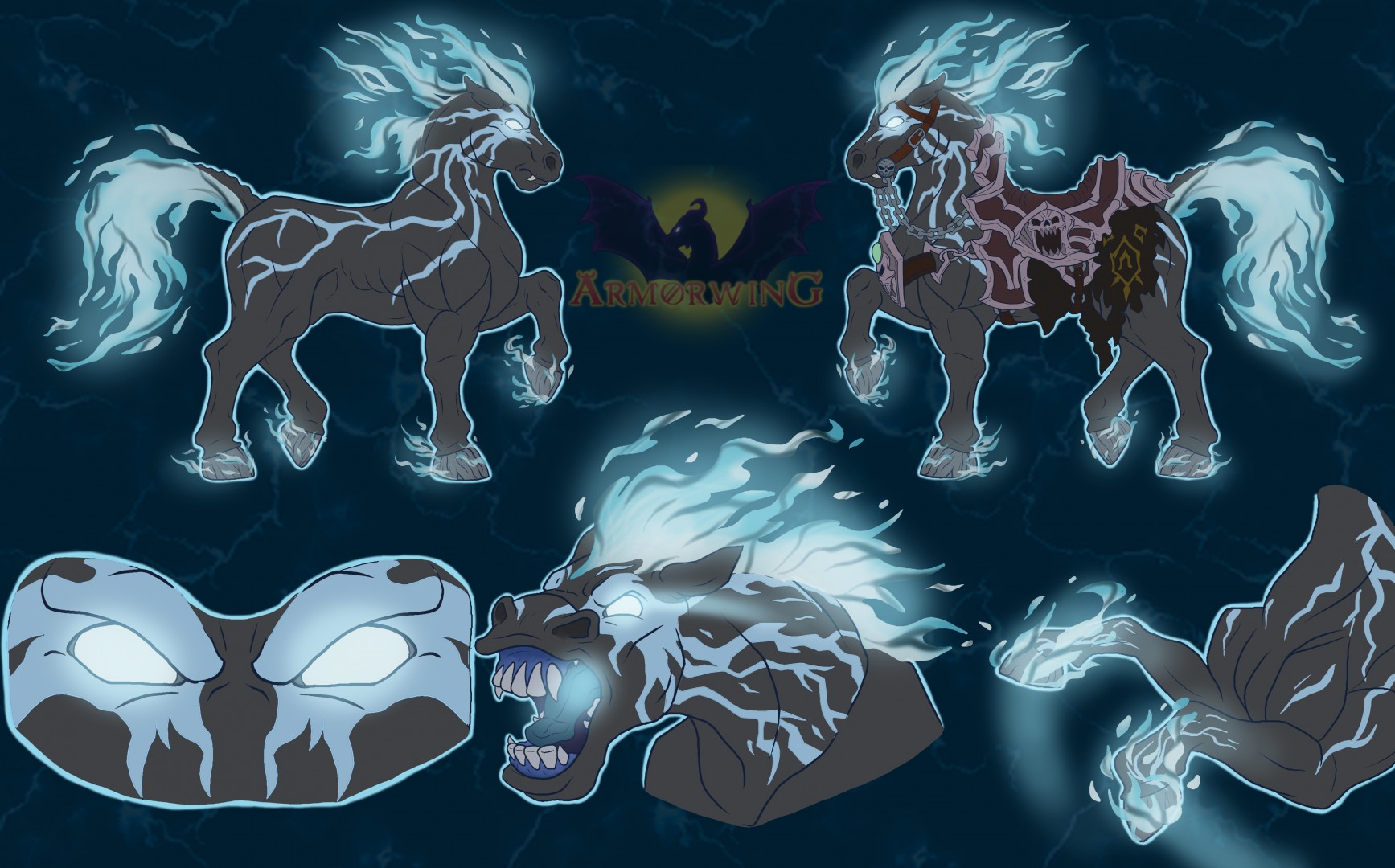 Third entry into my Darksiders headcanon series. Today we have Fury's horse, Rampage. Physical Description Rampage has a very compact body, with a shorter torso and neck. His head is large and square. Both ears have small nicks around the edges. The thick eyebrows create a perpetual scowl. He is the only horse to have canines of such length that they protrude from his mouth. Rampage has the most defined musculature of all the horses; the shoulders and hindquarters being of particular strength. The legs are thick and end in rough hooves. Electric-blue lightning marks streak out from his eyes and down to his flank. These can branch out further when enraged. The mane and tail consist of spiked flames tha often have the consistency of electricity. Both can increase in volume when excited or stressed. Saddle Description Much like himself, the saddle is pretty compact. It consists of a dull maroon leather base and accented with segmented metalwork. Unlike the usual cold look, this metal has a warmer tint to it, as if it had been pulled from a forge not too long ago. It's held on my two belly straps and one armored breast collar. A screaming visage reminiscent of the Charred Council's faces adorn the sides. Small armored extensions protect the upper neck and tail base. No stirrups. The reins are made of thick leather and sculpted chains. The blanket is a ragged cloth with faded runes around the flank. Personality Rampage is the most aggressive and touchy of the Phantom horses. Unlike Ruin, Rampage is not picky about where his fights come from; an army or a handful of obnoxious imps can yield the same vicious response. To Rampage, it's not about honor or simply causing violence, but demonstrating his power and why challenging him was a mistake. But he is also capable of fiery passion. He will go to great lengths to defend his rider and even the other horses. Despite being short with them, Rampage does care about the others. But expressing himself in any non-aggressive way is a very alien concept. He's often in conflict with Despair, who has no time for Rampage's unstable mood. Rampage gets along best with Mayhem, the only other horse that combats his attitude with her cool wit. He is at his most calm when he's alone with his rider, whom he finds the most comfort in. Abilities and Fighting Style Rampage possess the greatest endurance of the horses. As long as his aggression persists, he can keep running or fighting. His combat style consists of attacking hard with little concern for himself. An impressive durability allows him to absorb certain blows before serious injury occurs. His ferocious bite is capable of crushing bones. Strikes from his hooves have been known to pass through enemies bodies. When preparing for battle,he can build power that manifests through the jagged markings that grow along his body. His mane and tail can burn with an electrical current capable of stunning large enemies, or killing smaller ones. Enemies are usually left the most broken after Rampage attacks. Stay tuned for more!