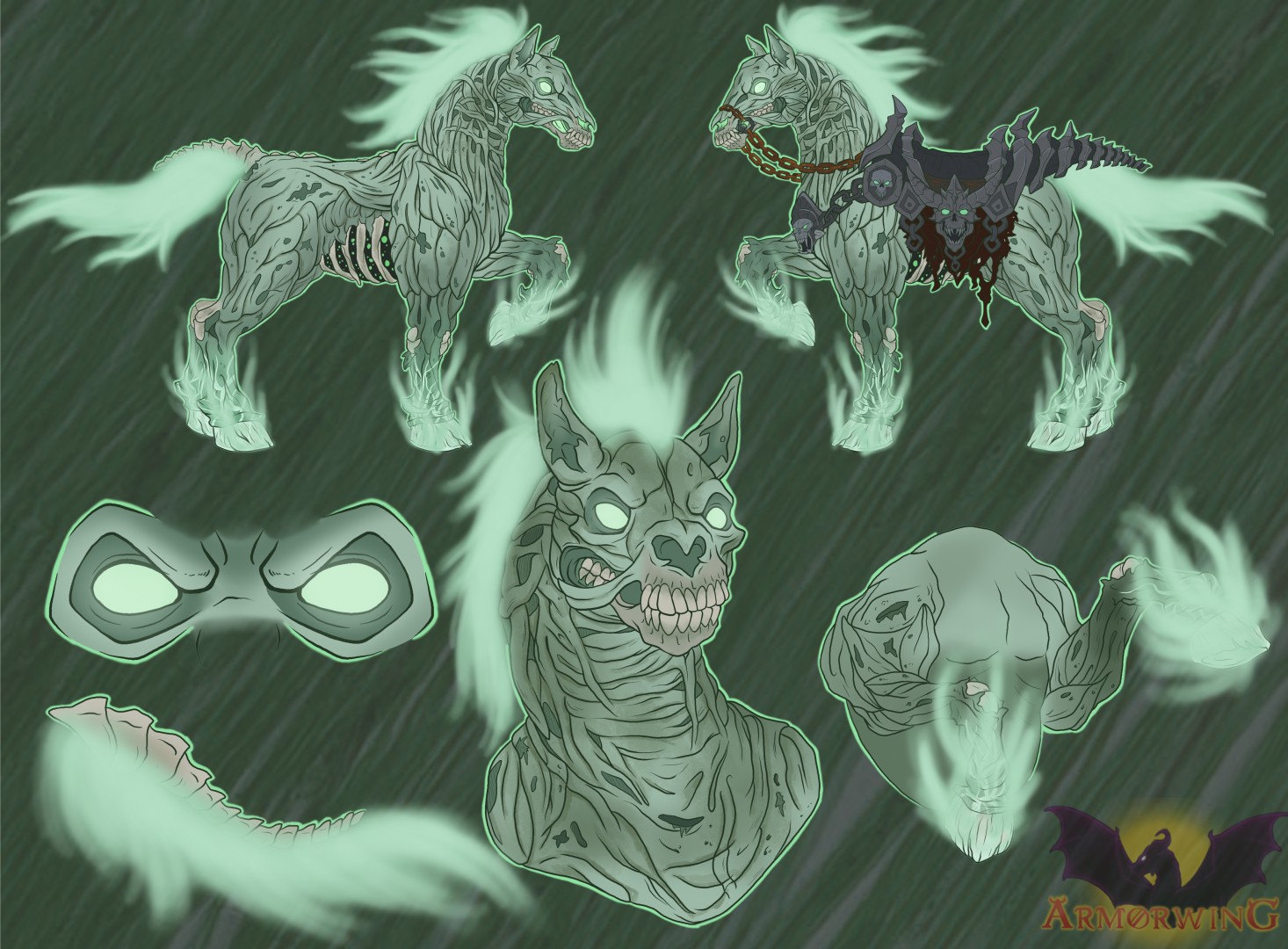 Continuing with the Darksiders headcanon series, we have Death's horse Despair. Physical Description Despair is a tall, lean Phantom horse with the appearance of a decaying carcass. His skin is in all shades of pale gray and green, spatterings of darker rot all across his body. There's no hair on Despair's body; rather a ghostly vapor emits from his neck and tail. It's normally a short stream, but can enlarge to a billowing flame when exerted. A skeletal face radiates green energy from the mouth and eyes. His ears are particularly tall and thin. Tips of bone jut out from the lower joints, back and tail. Most of Despair's underside is exposed rib cage that houses dark innards. What appear to be boils of the same bright green energy glow from these innards. Like Ruin, Despair's legs take on a more rocky texture closer to the hooves. His hooves also emit glowing vapors, though much more faintly in a natural state. Saddle Description The saddle consists of a black leather base and dark, cold metal. It's segmented like a spine as it travels down Despair's back and covers his tail base. It's held on by a single breast collar. Large demon heads adorn the sides. It lacks stirrups. A deep maroon burial shroud acts as a blanket. The simple reins consist of a bit and rusted chains. Personality Despair is somewhat reserved like his master. He's often silent, the only sound being his hooves on the earth. He's the most observant, acutely aware of life, death and decay in the surrounding area. Though not as bloodthirsty as Ruin, being in the presence of death does energize him, so he takes great pleasure in an active battlefield as much as a dead one. However, he's cautious as to not jump into unknown situations as quickly as some. He takes great pride in his position as the steed of a Horseman. Lesser foes who think they can challenge him or his rider will be swiftly defeated for daring to think themselves a match. He doesn't suffer fools or mistreatment lightly. He has good relations with the other horses as well as their respect. Rampage tends to test him the most, but Despair is closest with Ruin. Abilities and Fighting Style Despite his decrepit body, Despair is the fastest of the horses. When given his head, even angels struggle to keep pace. This allows him to move through enemies without giving them the chance to attack, and allowing his rider destroy enemies swiftly. But if he is hit, he possess a quick healing factor that prevents most superficial wounds from even slowing him (nor does he bleed). The vapors along his hooves can turn freezing cold, sapping the strength from most enemies it comes in contact with. Though his hooves aren't so heavy, they are sharp enough to cut through thick skins and hides. His sharp teeth have been known to sever smaller limbs should they stray too close. His sense of sight and hearing are the most acute of all the horses. He can spot enemies from great distances, but should it be difficult to see, his hearing can pick up sounds from dozens of miles away.