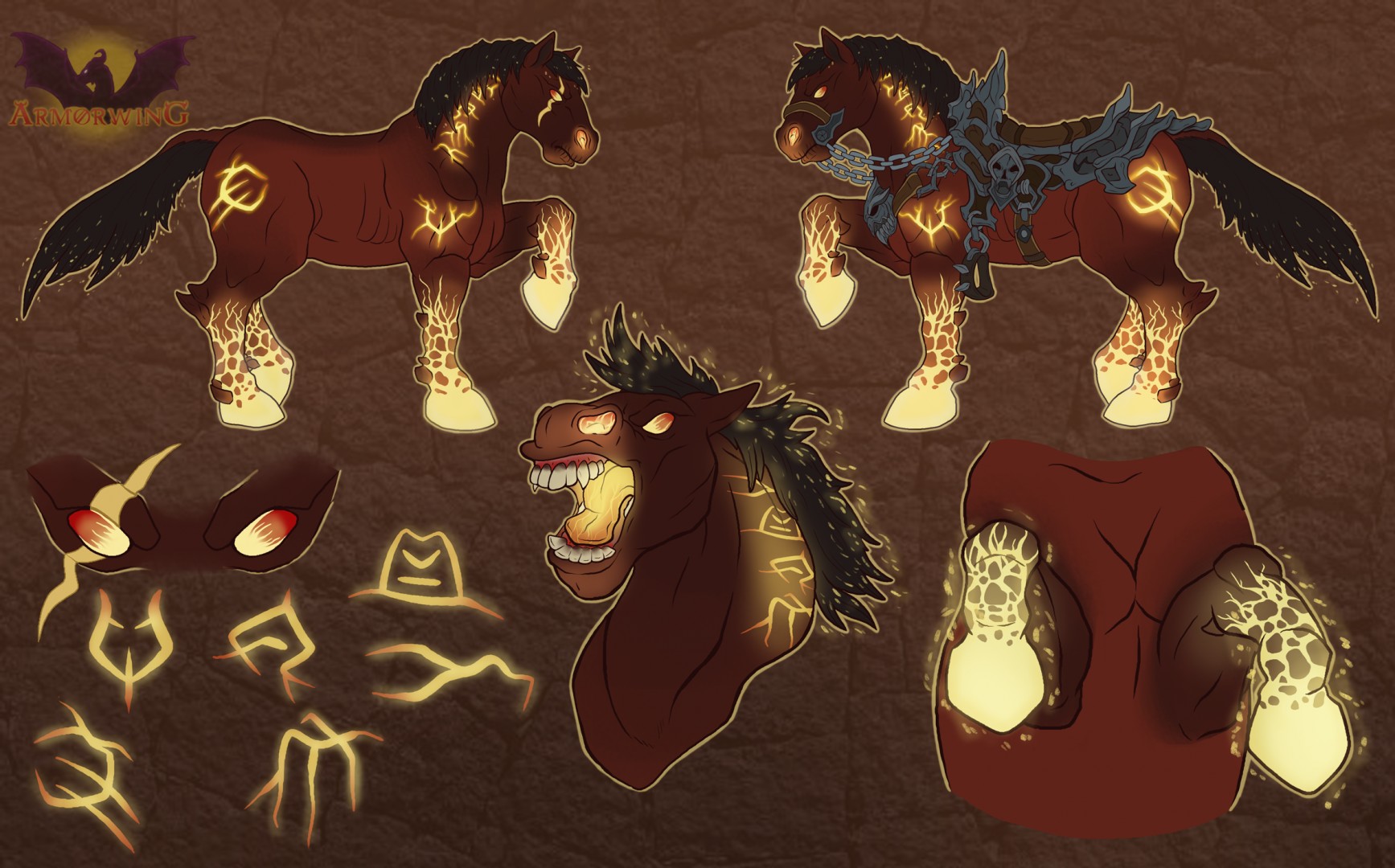 Because I can't shake my sudden inspiration and reignited love of the Darksiders franchise, I've decided to flex my creative muscles and create headcanons for the characters. As the actual Horsemen themselves are fairly fleshed out, I'll be saving them for last. Instead, we're starting out with the steeds (yes, they have personalities and intelligence) and I'll even be designing smaller animal companions for the other three Horsemen in the same vein as Death's crow Dust. First up is War's horse, Ruin. Physical Description Ruin is the largest of all the Phantom Horses. His build is that of a draft horse, but to greater proportions. His coat is of a deep red, fading to almost black along the head, neck and lower legs. His mane consists of rough black hair kept at a short cut. His tail is the same at an average hair length. The tips of his tail and mane appear to be at a constant low smolder, with small cinders flaking off. This effect turns into a small flame when enraged or in the heat of battle. The hooves have a texture resembling volcanic rock with exposed magma creeping up the legs. The hooves are indeed solid, but leave scorching or fiery tracks wherever he walks. Ruin's innards appear to be of molten lava. This is evident by the constant fiery glow from his eyes, nostrils and mouth. Again, this glow can intensify based on exertion and rage. Runes are etched into Ruin's neck, shoulders and flanks. It's unclear what purpose they serve besides branding, but they are believed to have endowed Ruin with some part of his rider's power. Saddle Description In sharp contrast with Ruin's dark and fiery appearance, his saddle is an enormous construct of metal and leather. The intricate metalwork also resembles volcanic rock as it spikes out from a crude leather base. The saddle is adorned with fanged and screaming visages that add to the terrifying presence of horse and rider. The simple reins consist of a bit and pristine chains. Personality Ruin is the horse closest in personality to his rider; a quick temper and little patience that make him difficult to deal with. He's always eager for violence and detests being held back from such actions. He's very loyal and trusting to his rider, though that trust had to be won back after he was captured and forced into a demon arena. Ruin is strong-willed and never backs down from any adversary. Were he capable of speech (understood by more than War), he would likely have the loudest opinion in the room. He's not terribly close with the other horses, save Despair, though this is believed to be due to their more frequent encounters. Abilities & Fighting Style As the general theme implies, Ruin is a brute on the battlefield. He's best known for his powerful charges that cut down any foe not massacred by War. He possesses incredible strength that both protects him and turns him into a living battering ram. His heavy hooves are capable of utter destruction to most armors, angels and demons. The molten heat around his body and hooves can sear through tough hides and metals. Though not used as often, he possess a crushing bite force amplified by the intense heat that radiates out his throat. Thanks for reading all of that! More to follow soon.