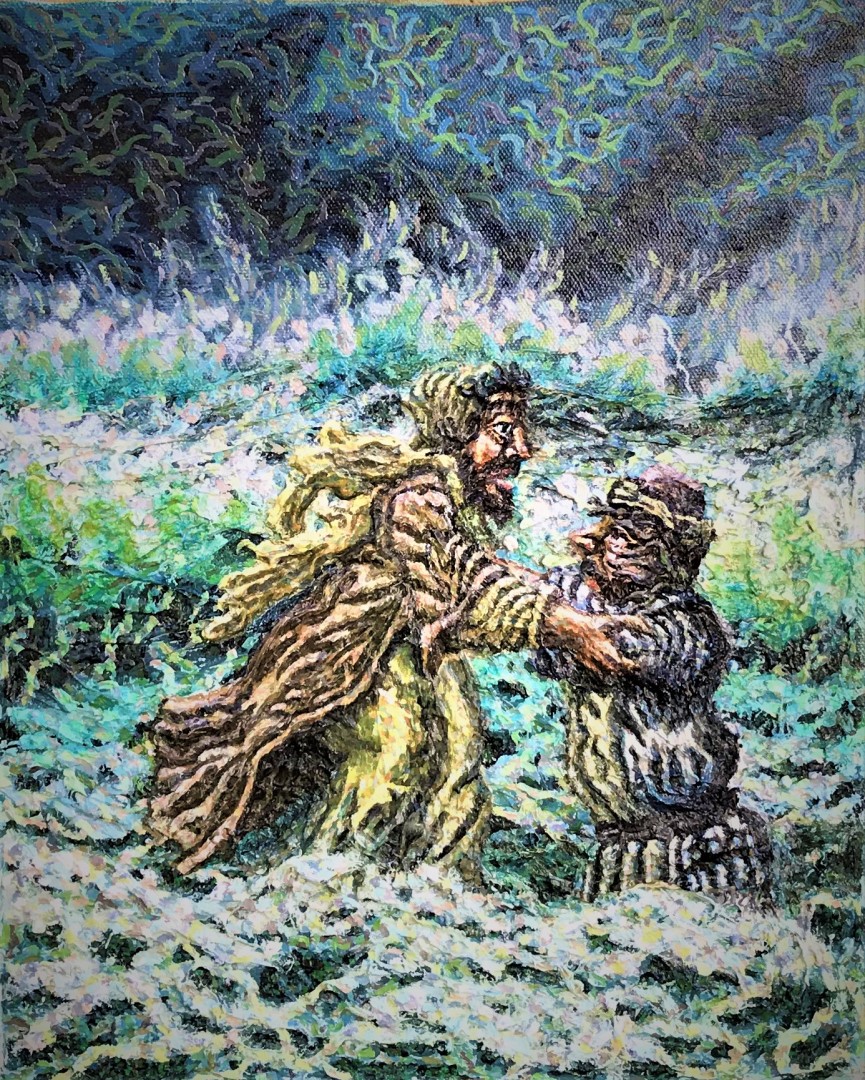 Peter took His Eye off Jesus and began to Sink.

Peter took His Eye off Jesus and began to sink. Medium: Acrylic on canvas Size: 11”x 15” Date: 2019-2020 This illustration is one of nine, in a mural about the ministry of Christ. This image is block number 7. This painting illustrates Jesus rescuing peter, as he start to sink in to the sea, because he lost his faith when took his eyes off Jesus, and focused on the violence of the winds and waves of the storm. Matthew 14:22-33 New American Standard Bible (NASB) Jesus Walks on the Water 22 Immediately He [a]made the disciples get into the boat and go ahead of Him to the other side, while He sent the crowds away. 23 After He had sent the crowds away, He went up on the mountain by Himself to pray; and when it was evening, He was there alone. 24 But the boat was already [b]a long distance from the land, [c]battered by the waves; for the wind was [d]contrary. 25 And in the [e]fourth watch of the night He came to them, walking on the sea. 26 When the disciples saw Him walking on the sea, they were terrified, and said, “It is a ghost!” And they cried out [f]in fear. 27 But immediately Jesus spoke to them, saying, “Take courage, it is I; do not be afraid.” 28 Peter said to Him, “Lord, if it is You, command me to come to You on the water.” 29 And He said, “Come!” And Peter got out of the boat, and walked on the water and came toward Jesus. 30 But seeing the wind, he became frightened, and beginning to sink, he cried out, “Lord, save me!” 31 Immediately Jesus stretched out His hand and took hold of him, and *said to him, “You of little faith, why did you doubt?” 32 When they got into the boat, the wind stopped. 33 And those who were in the boat worshiped Him, saying, “You are certainly God’s Son!” When I did my research, I Found very few biblical accurate illustrations of the event. Very few captured the darkness and valiance of a stormy sky taking place at 3:00 am in the morning (which is the forth watch of the night. Many illustrations I found, their skies were too bright and calm. I found that the seas in these illustration had the same lack of movement and violence, the sea would have in a storm that was so strong the disciples were not able to make any headway in their crossing the lake. I notice that all illustrations of Jesus walking on water, show the viewer His feet. In reality the waves would most likely block the viewer from seeing his feet on top of the water. The unavoidable black eye in most of these illustrations of Jesus walking on water, is the ridicules and unrealistic possess they have Jesus in, of Him rescuing Peter. You know the ones where He is making some kind of sign with one hand, as it is held up toward the sky, and one hand reaching down to peter. What was I trying to accomplish in my illustration? I want to be careful, to being accurate with costumes styles, and colors worn by the poor people of Galilean society. I wanted to be accurate in illustrating a storm on the sea of Galilee. I looked over numerous photos on line, of storms taking place on the Sea of Galilee. To understanding how the water and sky behave during a storm I studied the colors of sky, clouds, and water, during these conditions, in this location of the world? Showing movement in the air and the water. I used stylist brush strokes, to create movement in the sky and in the water. I am hoping to make people feel the storm’s violent energy. Showing power of the wind blowing against the bodies of Jesus and peter, through the movement of clothes, and hair. Showing the anxiety of Pete, with his body swallowed up to the waist, his face looking up to Jesus to rescue him from drowning. Showing that Jesus offers security to Peter, from being swept away by the wave of the sea. By his secure grasp of Peter’s back arms. He is able to lift Peter out of the water. The message I want my view to receive, is that everyone who comes into the world will experience trials and tribulation. We can overcome our fears and be filled with courage, to enable us to battle our ways through these storm in life. When we place our trust in the one who has authority over the power of the storm, who is Jesus a member of the trinity of God that created all things. Written by Stephen J. Vattimo 3/16/2020