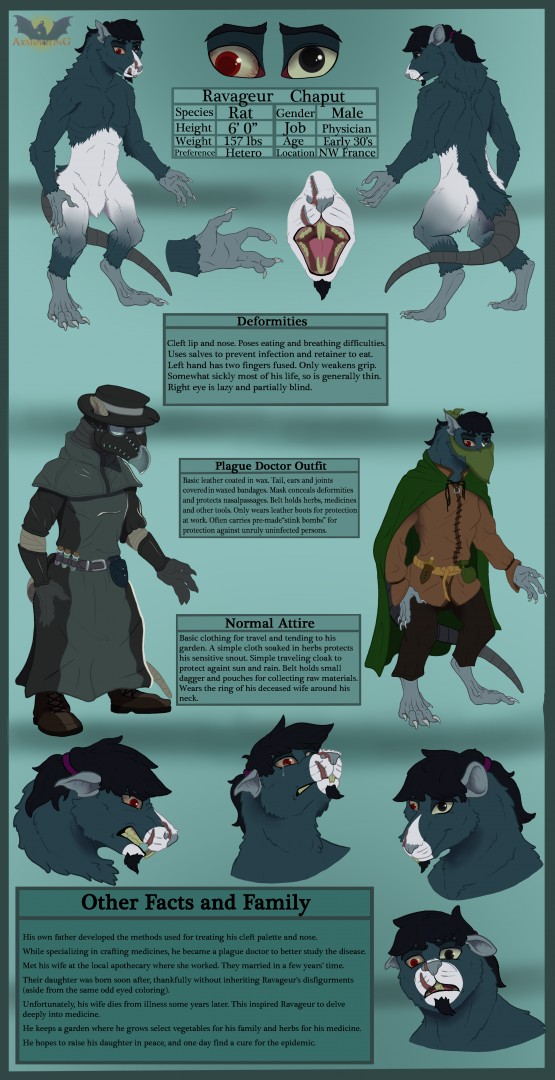 And here I've gone and made another character! I got this idea sometime back in October when I just really wanted to draw something plague doctor-related. Then I thought it would be funny if said disease combater were a rat. And here we have this fine fellow. Ravageur (French for "pest") was born in the early 1400s in Northern France. He was born so deformed that his family feared he would not live very long. After exhausting the best professionals at the time, his father took a chance on alternative healers located some miles outside of town. They took pity on the small babe and presented their methods for a simple retainer made of thick yet flexible fibers. It could be held in place with tree gum while the child ate. As for his nose, they recommended soaking a thin cloth in a blend of herbs to protect the exposed flesh from dust and keep it clean. Though difficult to maintain on an infant, the practices worked! Ravageur was still somewhat susceptible to illness and bouts of weakness as a child. As he spent a lot of time indoors, his father left a small collection of books to read. It was the single medical text that drew his young attention. Medicine and the functions of the body fascinated him, especially since his seemed to work so differently from others. But the text was limited. He had to know more. Believing this may be his son's ticket to a decent life (where his unfortunate face might not be so public), his father got him an apprenticeship with the local apothecary. He could still prepare medicine without being exposed to too much sickness. Now a young man and very accomplished chemist, Ravageur meets a new female apprentice at the shop. Aside from being full of life and curiosity, she was one of the few who grew to look past his appearance. A romance was quickly struck up and they married a few years later. They found more joy when their daughter was born soon after. She was free of Ravageur's disfigurements, save for having odd eyed colors. Unfortunately, his wife fell terribly ill when the child was seven years old. Despite Ravageur's best efforts, she passed. It was then that he discovered tales of similar illnesses from various parts of the country. A deadly force that showed no signs of stopping. Then he heard wind of a new specialty in the field of medicine: the plague doctor. Covered completely from head to toe in waxed leather outfits and long masks, it seemed the perfect opportunity to study this new disease up close while still protecting his sensitive face. He moved his daughter out into a small cottage outside of town, away from any sickness that may come. He built a shack to house his equipment and supplies. After working in the shop, he now takes summons to houses where the disease is believed to be. He hopes to one day rid these lands of the cursed sickness, avenging his wife and saving future generations from such terrible circumstances. As always, thanks for reading all of that!