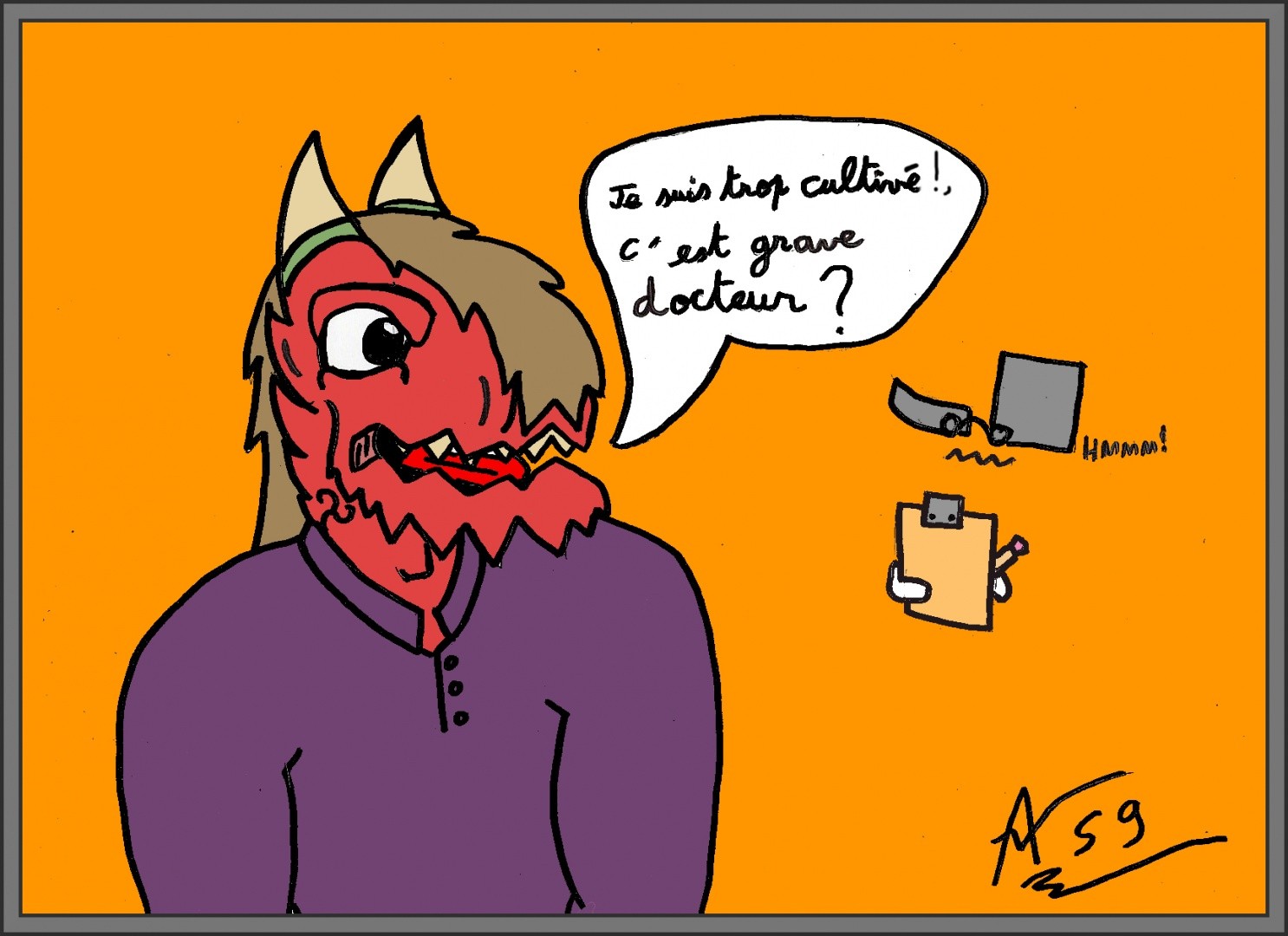 I am too much cultivated !

It spanked for a long time that I more made of original drawing with my characters (has a share Darkin) in mode(fashion) Bandage Dessiner(Be strained Dessiner), it is brilliant to return on this size(format), And here is the question that I settled(arose) for some day: I am too much cultivated, it's serious Doctor? " Then already why to say this kind(genre) of bullshit and what is that it is so grave as that? Then already, nan, me think that to be too much cultivated, it is not so grave, but I am afraid of getting big-headed and of playing the "Mr know-it-all" and what any world would be not about what I can speak and patronize people, and this kind of behaviour is bad and can become heavy in near people, because it is egotistic and assumes to be big headed, And for why, ben I have impression(printing) which needs to become stupid(weak) to be made "friends", be interested things(tricks) which pretend "trend"("tendency") or " it is fashionable what " while of base(basis), it makes you a sick person of consider Secret at Story or the Soccer, in movies and French music become "talks" to make trend(tendency) and go flat out with bad cliché(picture) and stereotype of all kinds in near our expensively " head blond with the blue eyes ", And as a result, I have + an impression(printing) that to be too much cultivated according to his(her) people there, it's rubbish or her(it) to break as a Parisian cut(boho), to see downright "useless", because I am not the kind of guy which likes the Soccer, or which likes stuffing the geugle with its mark(brand) of beer preferred, or to like(love) last pop music sung in auto-money by a bad rapper or of likes last French movies with as top of the bill Kev Adams, I can you it taken(brought) out of the several like that, them lousy example has now several there which would like to say " they does not need to follow, to make as any world and follow the "movement", but you go to answer me that I am wrong, and shall be right to you, because even at the time of the Punk, everybody did not follow this fashion as if by magic, to see even, any world in the 60s can not like Beatles, because it depend on your tastes, and it is logical, In reality, I have of it to do nothing of whom you are, because one can become that one want, but since we to harass us not with the same looped bullshit, no stop with a morality in two balls(bullets), and forced to become that one want not to be, all this to become integrated into the company(society), and I still have impression(printing) even today, we return people an idiot, and it's a pity that I still have this impression(printing) to force to become that I want not to become, I am just a guy who likes very much the difference, and not to make seem to make something others, it are just, heavy and not creative, With this, I hope to have done well me to understand(include), because I think that I was at the end of my ideas on this summary, to Have a nice day either an evening or whether you are, AV59 ^^