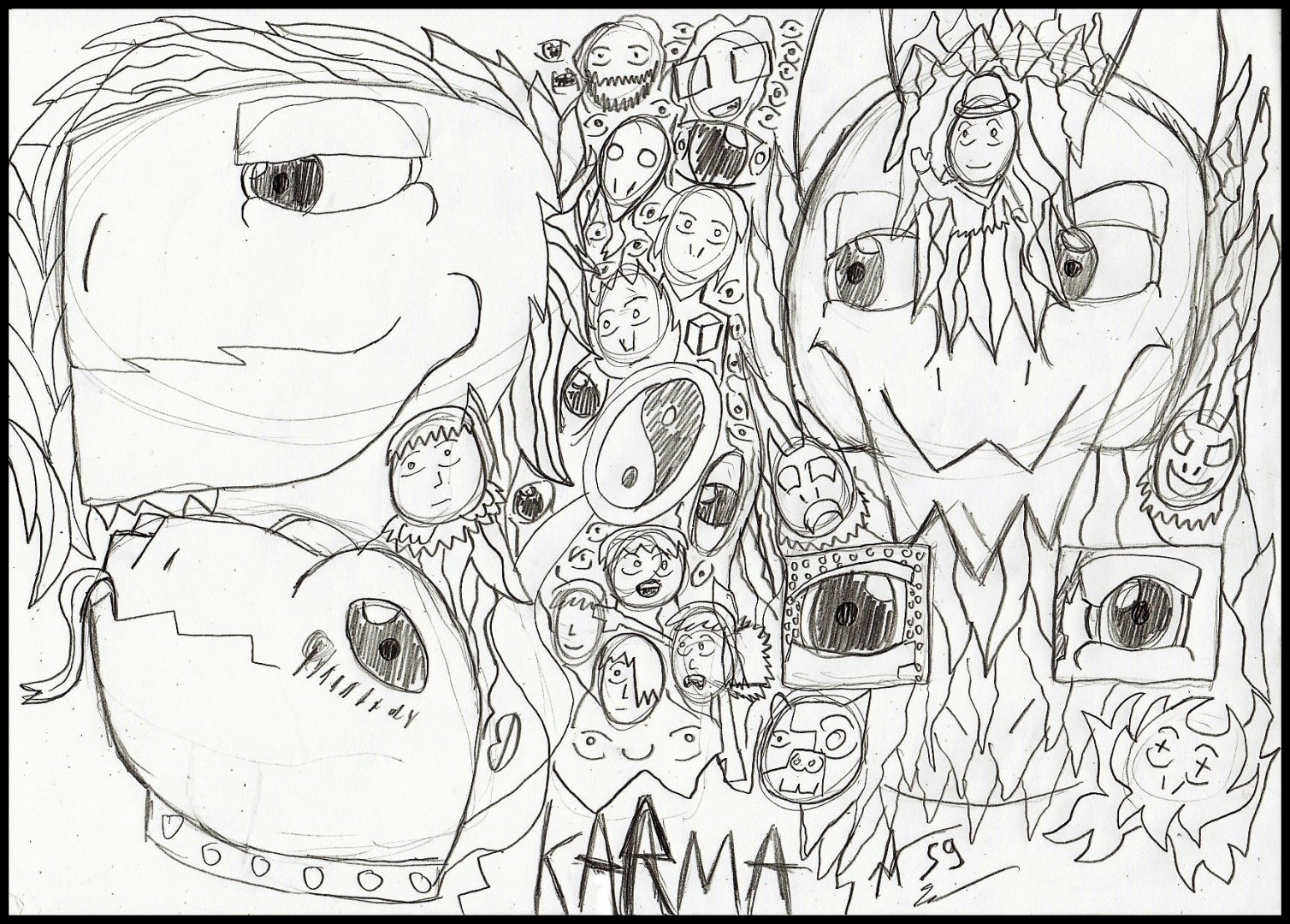 Then due to seeing my drawing and what some one had the courage to read my summaries who explains my life "artist", you know me a little near, if you are remembered this tradition of drawing the album Revolver of Beatles, because it was stylish(well-trained) of base(basis), well, er you owe you call back(remind) that I made very former(old) one B.D, whose project was to cancel for several problem and all this, And in this universe of the B.D, he(it) had a rock band of the 90s fictitious which to call KARMA, and which told a little the story of this group and bla bla bla, the continuation(suite) one know her(it) (or not for what one not read my summaries), to return there, to my first drawing publish on DeviantART, and as I have specify the date, it is going to make soon, 3 years which I have to begin in publish my drawings on the Internet and share to the world my frenzies parodic and improvised by my "art" Then yes, I yours to put his(her,its) quotation marks, because even today, a lot of people, and most of the English, considers my caricatures improvised as " the art ", to see even of Street Art, roughly graffiti which you finds in the streets which any world can everything, then look and I will have like(love) but is anxious to say a thing(trick), 1) need to have balls for go draw in walls without being pitched(caught), and I, I have not enough to make him(it), and especially the time(weather) for that, even if I shall have like trying the experience(experiment), even, ask for an authorization of draw on walls (if it is possible, because needs call back(remind) that one to live in the reality, not the world of bisounours) 2) need to be one whore of Anonymous for keep(guard) the last mystery the one who in fact that and to have then a certain popularity initially, and I, it is done, because any world which goes to my account Facebook have a photo of the truth I and of the city or I live, then level Anonymities, it died direct, And of 3) you are serious? It is just crap caricatures made hastily and sometimes the big laziness to finish him(it) by a guy who never gets out of his house by fear of being banged(typed) or offended quite names by Barakis who goes out quite straight ahead of HLM(COUNCIL HOUSE), I am not haring keith or Banksy the guys, I am Alexis Duée who makes the same lousy character since 2015. Anyway, already on the base(basis), it was to speak about my 1st drawing publish on the Internet, but during the writing of this summary, I am call back of his(her,its) comments of nobody who hangs seriously my "art", whore I would like(love) so much remain modest that to be big headed, And you, at public who looks at me for a long time or recently, you think that I made by " the art " or that it is just drawing commonplace? On it and I shall always repeat: to have a nice day either an evening or what you are, AV59 ^^