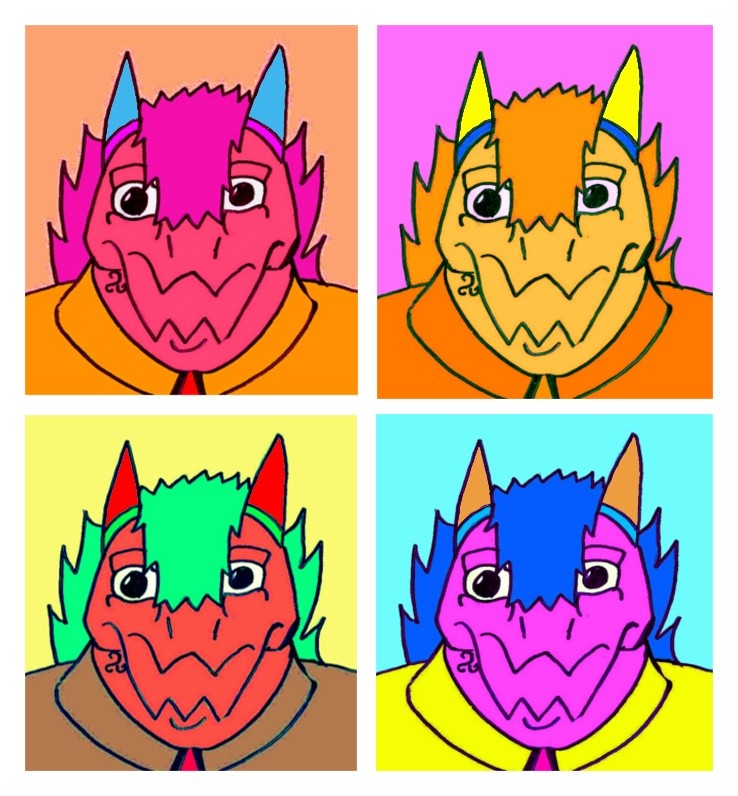 Then for the explanations, I just redid an old thing(trick) which I more made since 2015, the year or I have to begin to publish my drawings on the Internet, at the beginning, I trusted me, even if I trust still not enough, at the time, it was the worse, I shall never have dare to publish my drawings, because I shall have believed that any world go to say that it was ugly, But I was wrong, and this year, it was also one years experiment with several media which was mainly mixtures of photo and drawing, or to affect(touch) to several tool of the software that I use(get), and the one that I am to call back most, it was in this "tribute" in Andy Warhol's PopArt and his(her,its) famous paint(painting) as there now, and I am to call back of a thing(trick), me to draw not to clown around or not to improve me and become any commonplace draftsman, but I wanted to make some art with which I have in the stomach, with that I feels in my head, and of me freed(released) of whom I have at the bottom of me, sometimes people told me " but pk you goes out not ", well, er I am why going to tell you? If I goes out not, it is because it is boring(tiresome) of go outside, there is always nothing to make, and corners(places) or I want go are surrounded with HLM(COUNCIL HOUSE) in most stupid and most boring(tiresome) things(tricks) to be made, I shall have like(love) go outside and met people like me, but finally mess(brothel), it is the reality, as if in my corner(place) lost, him(it) shall have people as well tarée as me, and I told you you all, but As if go out to bum around was the answer absolved in quite our whore of problem in life, to begin go on the Internet, and you verrée if it is possible always later to see people which pleases you for whom are, If I say that, it is because that spanked for a long time that I had to forget that I spanked before of forge ahead on the social networks and to begin in go to Chats, I always have was sensitive to the critic in the point to change totally that I am, at the level of the style and to make more seller for the furry side Dragon devil, my character, it's almost as if it became a whore to interest people to come to speak to him(her) and to have fun with him, because he(it) more had me of contact human, not digital technology, but in her(it) really life, me who, me to like(love) so taken(brought) out, I want taken(brought) out, but how trust to people who ruined the life to you since you were a child and to be traumatized by his(her) last ones, If pleases you, speak I tomorrow, leave I comment, and I would answer you, I am of valenciennes, if you are from this city, made the I to know, I would like(love) so much see somebody, grumbles bottom be one eccentrics, I want to have my whore of place(square) on this lousy company(society), on it my at friends and unknown who is a member or nan of my group, To have a nice day either an evening or whether you are, Alexis Duée ^^