More artworks made by Altergatto 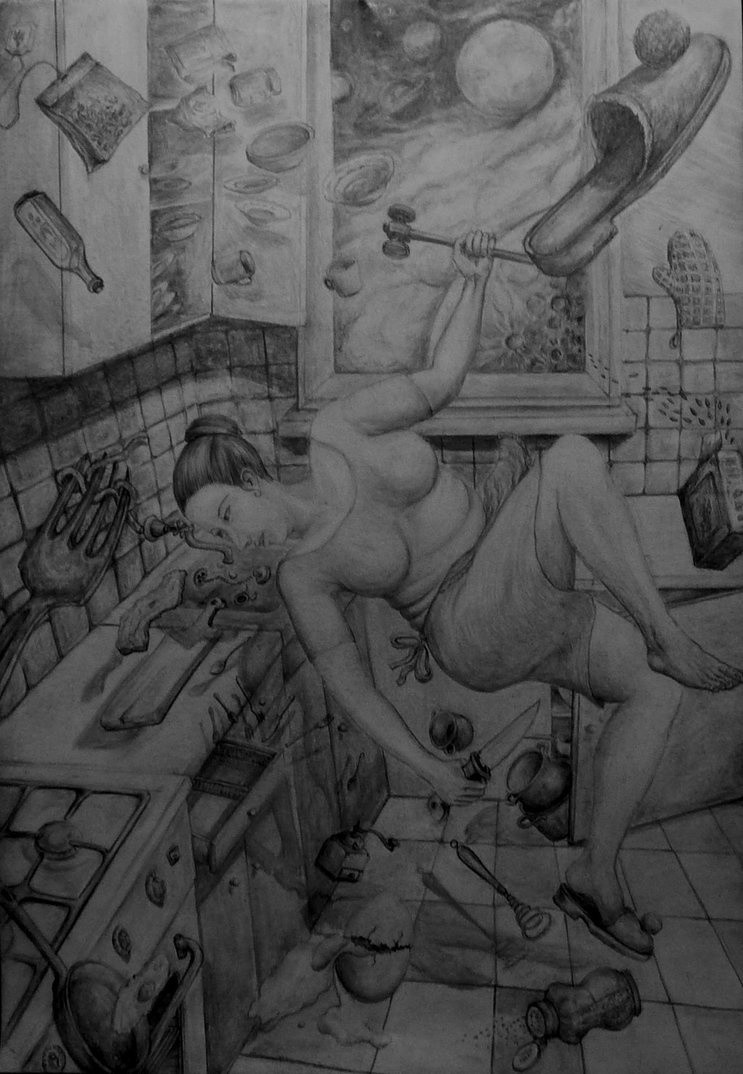 Wacława as every day struggles with work at home. It was late - she didnt make dinner yet! She need to be in a hurry to finisch it. Family members will come home soon and they will be very hungry .Then washing, ironing, cleaning and TV series for a Goodnight! She is upset that she did not have time to do everything perfectly .Wacława does not have time to do the manicure, or even go to the hairdresser.She often is angry with his family - her pretensions, yelling convinces the environment that they should not abuse their patience. Routine and household duties deprived her of all illusions. Passion, tenderness and love are just a distant memory. Although Wiesława tries to have everything under control her world loses its balance and was no longer controlled though she took care of it so that everything was in its place. It is always cleaned, washed and lunch made on time. How did it happen, why? Wiesława barely catches the balance - helplessness and lack of meaning in life comes by her and her entire existences .....The battle begins in her heart t's a real struggle with something that she is not able to recognize at this moment, but it's sprouted in her heart and hollows and grows ... it's such a micro elementary particles swirling and mixing with the smells of roast ... but this one particle Elemental similar to photon is able to displace all other circulating in the environment of Waclawa. She suddenly finds that she is carried by something that she had not experienced yet, maybe sometimes she felt the fundamental particles which was composed from at least a thousand ideas for culinary delights floating in her kitchen - but this was not the same. So here begins the battle ... Wiesława realizes that something strange and unknown overpowers her and it's too late to oppose it, she can not command the wretched body to free herselve from the confusion and chaos....... the more potent molecules as antigravity Magnet God absorb other rotating hot and irritating her senses the more it is enslaved and freed it from the pervasive apathy ...Wacława lets her hair down and it will be like a curtain that will eclipse the ordinary daily life, she take off clothes stained with grease and the echo the original Eve, take possession of each nanoparticle her fasted femininity. Wacławo, Wacławo, what's wrong with you? - She asks herself. What? What kind of name this is !? I am Venera - the goddess of love! Tekst MTrafimoff & Altergatto & X