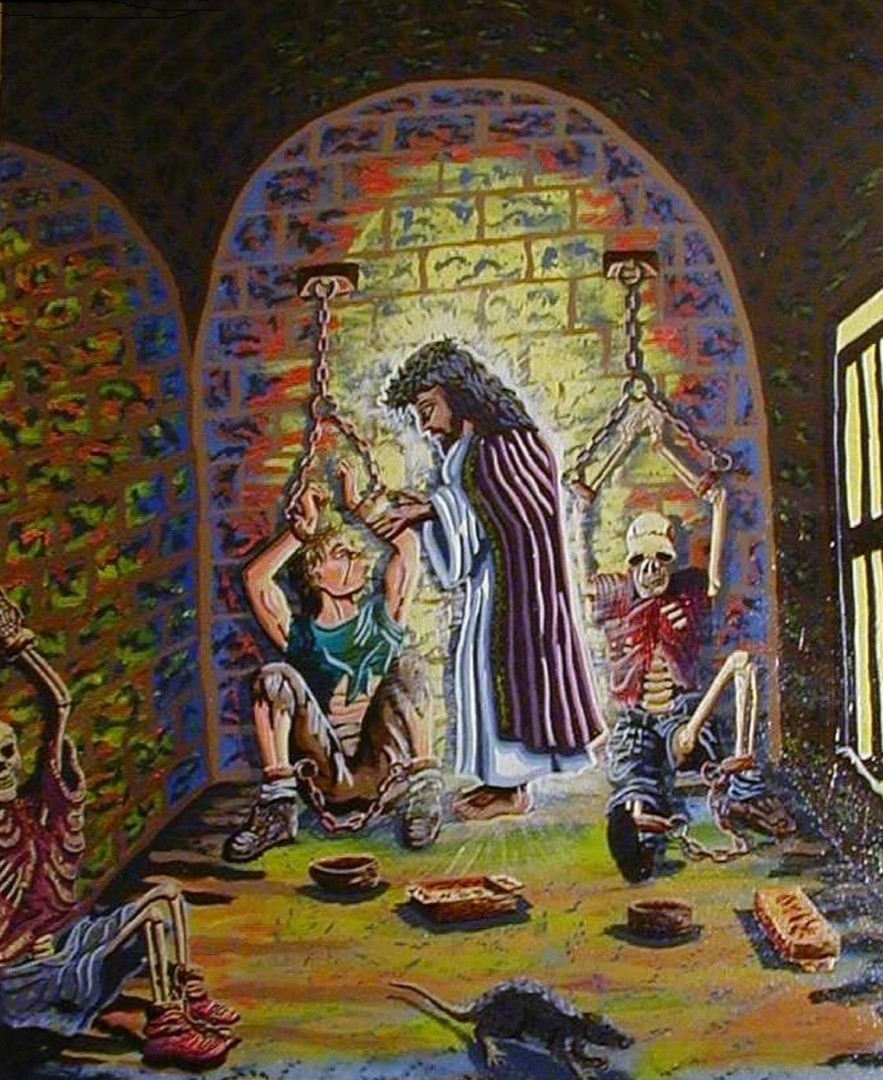 Size 2'30" x 4' on canvas Medium acrylic painted 1994 In this painting the theme is with out Jesus there is no escaping our destiny to be punished for our sins and be cast into the eternal lake of fire. The theme first was illustrated in a poems i wrote a year earlier under the same title. The cell where this scene take place was inspired by a jail in Rome Italy where the apostles Peter and Paul were jailed at separate times. The skeleton figures, one male and one a female represent the fate we will all face unless God saves us through His Son Jesus. The clothing the figures are wearing are to represent different social classes. God is no respecter of social class we are all are guilt of sin, and noting out side of putting one faith in Christ will save us. The skeleton figures represent those who reject God's plan of salvation . The figure Are chained by hand and foot to represent our inability to escape the judgment of our sin. The figure Jesus Is dressed in a scarlet roman cloak , which the Romans put on His shoulder,along with placing a crown of thorns on His head, to mock Him as being the king of the Jews. I wanted to also show His face disfigure by sever beatings, and show His beard ripped out which the Romans did to Jesus during the mocking. I reframed from doing so because with out the icon Jesus look, long hair and beard and mustache, My viewer might not recognize who i was depicting. Jesus also has holes in His hands and feet to complete the whole picture of every thing Jesus suffered to set man free from sin. If you look closely you will see that Jesus has a key in His right hand. He is setting The living prisoner free, be cause the prisoner has excepted God's plan to save him. The open cell door and the bright light represent once a person has been set free they will never come under the judgment of the lake of fire. The rat are to represent that we live in a cursed word because man had rebelled against God. Sure there is still some evident of beauty in the nature world,but there is greater evidence that nature and man are in a chaotic state.