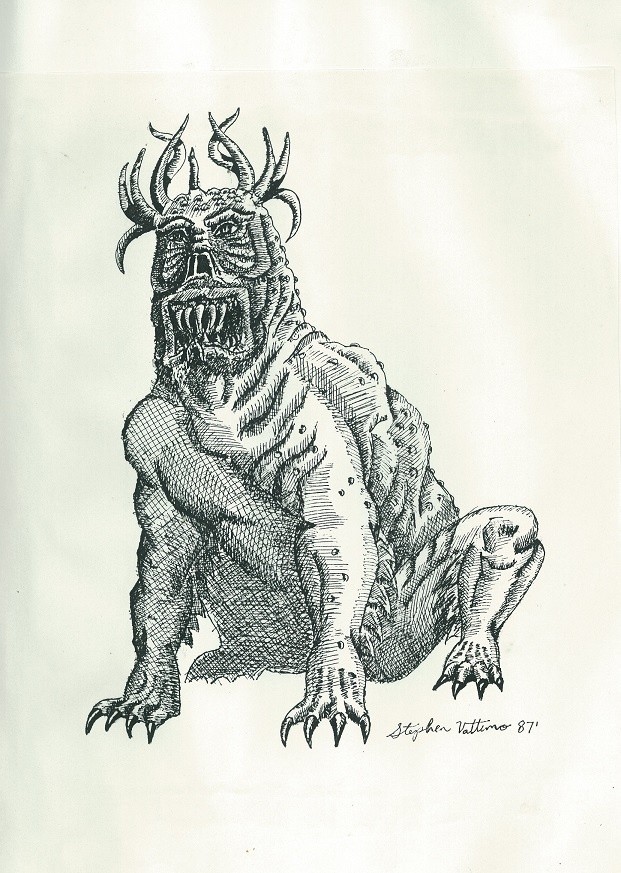 The Vision Of The Four Beast ; Fourth Beast

Medium : Ink and Pen on Bristol Board Size 11'" x 15" Year completed: 1987 This rendering is part of a collection of illustrations I did for a professor who taught a course on the books of Daniel / Revelation. He used these illustrations in his teaching materials. The course takes a look at the prophetic events of four different monarchies that will rise to rule over the civilized world, then fall. Three of these monarchies have already come and gone through out history, the fourth is going to rise and rule over the world during the end times. The Fourth Beast Daniel chapter 7: 7 - 8 " After this I kept looking in the night visions, and behold, a fourth beast, dreadful and terrifying and extremely strong ; and it had large iron teeth. it devoured and crushed, and trampled down the remainder with it 's feet ; and it was different from all the beast that were before it, and it had ten horns. ( 8 ) " While i was contemplating the horns, another horn, a little one, came up among them, and three of the first horns were pulled out by the root before it ; and behold, this horn possessed eyes like a man, and the mouth uttering great boast. The vision interpreted Daniel chapter 7 : 15 - 27 ( 15 ) " As for me , Daniel , my spirit was distressed within me , and the vision in my mind kept alarming me . ( 16 ) " I approached one of those who were standing by and began asking him the exact meaning of all this. So he told me and made known to me the interpretation of these things: ( 17 ) ' These great beast, which are four in number, are four kings who will arise from the earth. ( 18 ) ' But the saints of the Highest One will receive the kingdom and possess the kingdom fore ever, for all ages to come.' ( 19 ) " Then I desired to know the exact meaning of the fourth beast, which was different from all the others, exceedingly dreadful, with it's teeth of iron and it's claws of bronze, and which devoured, crushed, and trampled down the remainder with it's feet, ( 20 ) and the meaning of the ten horns that were on it's head and the other horn which came up, and before which three of them fell, namely, that horn which had eyes and a mouth uttering great boasts, and which was larger in appearance than it's associates. ( 21 ) " I kept looking , and that horn was waging war with the saints and overpowering them. ( 22 ) until the ancient of days came, and judgment was passed in favor of the saints of the Highest One , and the time arrives when the saints took possession of the kingdom. ( 23 ) " Thus he said: " the fourth beast will be a fourth kingdom on the earth, which will be different from all the other kingdoms, and it will devour the whole earth and tread it down and crush it. ( 24 ) ' As for the ten horns, out of this kingdom ten kings will arise ; and another will arise after them, and he will be different from the previous ones and will subdue three kings. ( 25 ) ' And he will speak out against the Most High and wear down the saints of the Most High one, and he will intend to make alterations in times and in law ; and they will be given into his hand for a time, time,and half a time. ( 26 ) ' But the court will sit for judgment, and his domination will be taken away , annihilated and destroyed forever. ( 27 ) ' Then the sovereignty, the dominion, and the greatness of all the kingdoms under the whole heaven will be given to the people of the saints of the Most High One ; His kingdom will be an everlasting kingdom, and all the dominion will serve and obey Him.' Written by Stephen J. vattimo