More artworks made by JesterOfDestiny 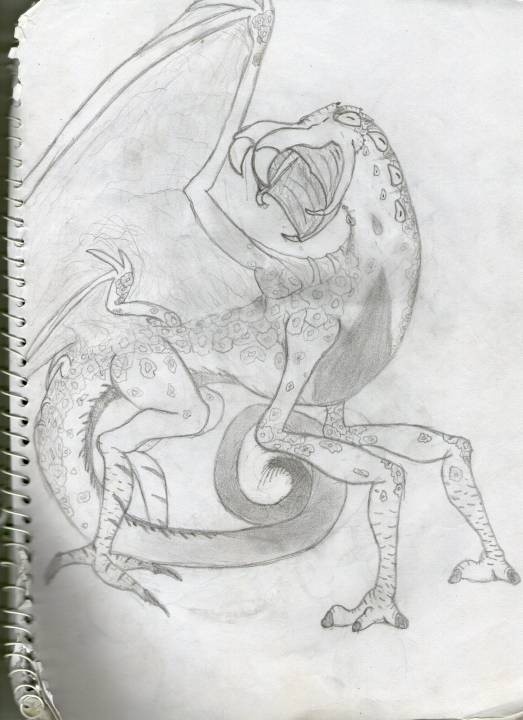 This dragon-like creature truly is something from a fairy tale. Its home planet, Infersal, also is something fitting for a fairy tale. The chüronos adapted well to the extreme temperature changes and able to survive years with the sunlight blocked by volcanic ash-clouds. It's thick skin allows it to not die immediately from falling in lava. Evolved from a squid-like creature, it sports two different pairs of legs and two pairs of strong wings. Bones are almost absent from it's body, save for the bony limbs. The front legs have stumped fingers, used for digging into mountain-sides and delivering powerful blows to their enemies. Males are often seen punching each other with their front legs, especially in mating season. Their back legs have 3 long, clawed fingers, good for grabbing its prey and carrying it in the air. Their wings have grown together, so it creates a gigantic sail, while flying. The wings and the sleek form let it maneuver in the air very quickly and easily. They have very flexible tails, sometimes used for minimal tool usage. Perhaps their most intriguing part is their mouth. Its mouth is made up of five additional bony limbs, used for grabbing and helping food down its tooth-filled throat. Meat gets sliced apart inside their throats and the excessive saliva pre-digest food, so it can easily pour down into the gastric chambers. On the side of its neck are its eyes. Because of their placement on the side of the neck, their field of vision is limited. But it isn't a problem, since they can freely twist around their necks. The Chüronos forms colonies on the side of steep hills and cliffs. While they are social creatures, they gather food in solitude. They leave their homes on the first signs of a nearby volcano eruption and come back once the lava cools off and the earthquakes settle. If their holes collapsed during the eruption, then they find another cliff, or even make a new one. This migration is the only time they form packs and hunt together. The young ones come out of their eggs fully formed and are capable of flight.