More artworks made by LeShar 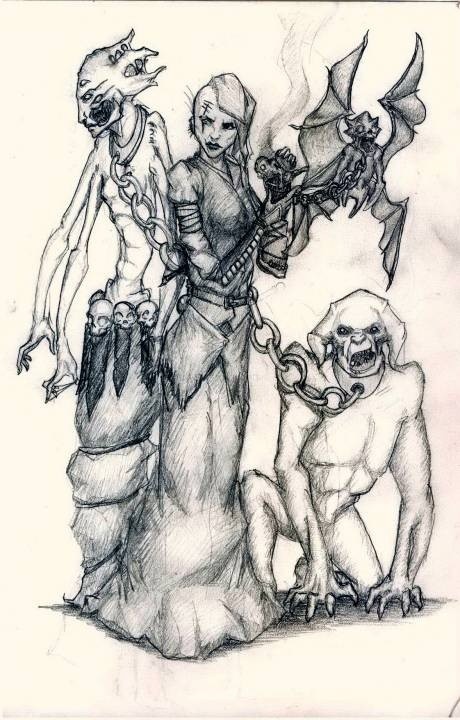 This pretty girl here is Jenny, an unlucky homegrown demonologist who once found a summoning ritual in one of her books. She decided it would be fun to try it out. She already knows some binding spells, so she's in control, right? Well, as it turns out, almost. She basically punched a dimensional hole the other end of which appeared right in front of three very drunk and now very confused demons. They were never exceptionally good at anything that would interest a common demonologist, like knowing stuff, granting wishes, wanton slaughter or making love. In fact they were a tailor, a construction worker and a mailman. But decided it was their best chance in life and so they rushed into the hole. Jenny was pretty much panicking at that point so she cast a spell that conjured three very sturdy collars out of thin air and put them around demons' necks. Now thry were bound to Jenny forever, because she did not know that this particular spell was meant to hold the beasts of much greater power than these three combined. She also did not know that she is now bound to them with bonds just as strong. So now these four are stuck together for a very long time. Until Jenny learns the undoing spell, that is. The catch is that there never was one. The chains are supposed to bind a demon to some poor mortal soul, so that when said soul departs to the heavens, the demons have to follow and be promptly burned by the holy fire of the angels, because angels can't be bothered to carry their feathered asses down here and burn them without sacrificing any lives. Yeah, angels are jerks. Jenny is a self-taught demonologist. This was her second summoning ritual. The first one ended with her face scarred, her right eye blind, one miserable village burnt to the ground, said ground salted and then burned again just to be sure, and a very distressed rabbit who's now hearing a voice in its head that's not talking about carrots or reproduction. Well, a little bit of reproduction. No carrots though. Unless it invents a new way of slaughtering innocents with them. Lassal is a weaver, a spider-demon. Their usual jobs are tailors, because their webs are very thin, very shiny and about as hard to cut as a steel bar two fingers thick. Her mother was an archer, summoned usually to fend back various invaders. Twic she managed to break loose. The first time she brought home a fancy belt adorned with real human skulls. Very exotic. However when Lassal go to know humans a little better she noticed that most of them have bigger skulls that the ones on her belt. She loves children very much, they are fun and innocent and cute and very tasty. The little winged imp's name is Argajaghal. He is a mail-imp. Carries some not very heavy things over not too long distances. He is quite young, was drinking for the first time with his friends and now this awesome adventure happens! His little mind hasn't yet wrapped itself around the fact that his almost inevitable future involves angels, holy fire and pain. Let's all hope it never will. Now for the last member of this jolly bunch, Markus "Puppy" Von Shtolphensmitz. His father was very fascinated with human culture. He was a very often summoned mercenary, and he loved very second of it. Markus has spent his life halping other demons build their houses with nothing exciting ever besides that one time when Borgalagrash drunk water for a bet. He was spitting for a week. Good times. With this considered he was not the most beloved child of his father, and by the irony of the fate he is the first one of them to be summoned. It's likely that his story will end the same way as did his father's.