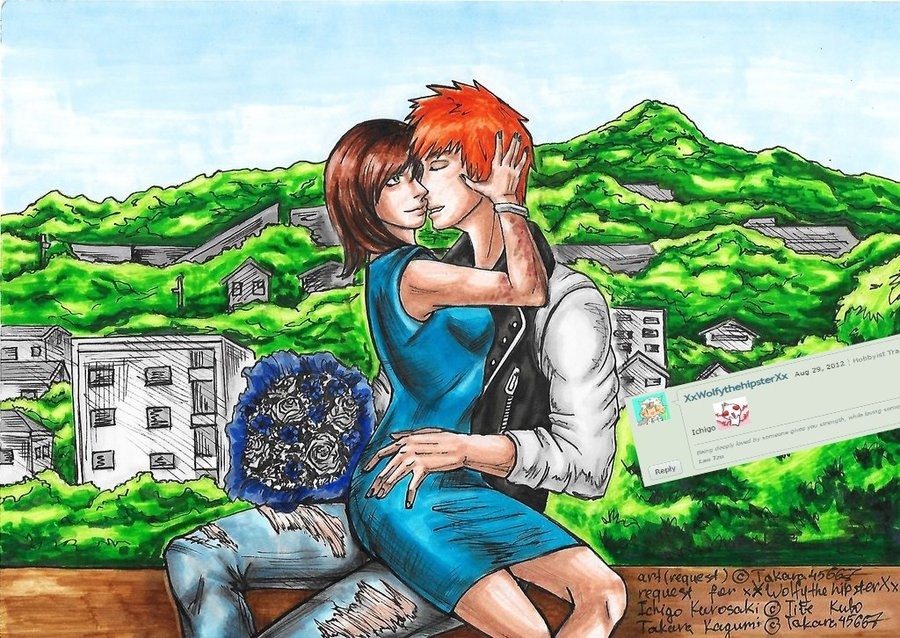 What to use: pen(for build), felt tip pens (firm "BIG", Visa), Promarker's (Blender, Warm Gray 1, Powder Blue), Marker "FLOP" (Brown); How much time spent: 4 days. Description: Good day to all. Once, long ago, namely in August 2012. When I was drawing more bad I conducted a request in this journal. And then realizing what crap I've drawn. I practiced for a long time (5 years). And finally, today (25/10/2016), was able to complete it. I painted it for three days. Regarding the practice, I was not referring to this work, and the degree of my drawing. As many have noted, the fact that I am now re-drawing my works. And then there are those comrades who find fault with my old work, and using it humiliated me hmm. It does not matter! Shrug This work, I started to draw actually 4 days ago. (Namely 10/21/2016 g). The request was whether to depict Takara Kagumi (my main character) from Ichigo Kurosaki (the protagonist of the anime "Bleach") on a date. And I decided to use this style (http://img-cache.cdn.gaiaonline.com/2cdbf711a14a84dafd3165f19f2ffbcf/http://i164.photobucket.com/albums/u11/Rasui/sample_4df5729624f93b447dd61c224568cc9e.jpg) at Ichigo and Takara depicted in a blue dress. For background use background of Karakura. To begin with, I morning (namely six in the morning). Sketched a sketch before going to the institute. After serving boring classes at the institute. After returning home, I started to create the proportions and creating basic lines. And since I have insomnia I finished to 4 in the morning. When I started to the color. I tried not to obscure the work. In this work, I worked exclusively with felt tip pens. It is certainly more difficult than markers. In this work, I worked exclusively with markers. It is certainly more difficult than markers. Since felt tip pens pound paper more than markers.Lighter areas I have identified a marker of "Blender". What bright places? Well, for example, a highlight on the hair, the upper part of the crowns of trees. And scroll around the figures, so that they did not merge with the background. Of course on the bodies, I would not show such characteristic muscle. But probably because of the game Mortal Kombat 9 Komplet Edition (recently to play it). But I hope that they do not look too much inflated. As for the hands of Takara. If there are those who I have long known, they will not sprshivat. And for those who do not know, I would say that there is such a disease, such as eczema(a medical condition in which patches of skin become rough and inflamed, with blisters that cause itching and bleeding, sometimes resulting from a reaction to irritation (eczematous dermatitis) but more typically having no obvious external cause.). With that I have long been living. In general, I hope that this work you will enjoy! ;) Art & Takara Kaqumi © me Ichigo Kurosaki © Tite Kubo Request for :http://xxwolfythehipsterxx.deviantart.com